LAUDERHILL, Fla. (AP) — India clinched the Twenty20 series against West Indies with a game to spare after winning the fourth by 59 runs on Saturday.

The Indians posted 191-5 and bowled out West Indies for 132 in the last over to the delight of the pro-India crowd.

The game was delayed for 45 minutes after morning rain and West Indies hoped to take advantage by bowling first.

But those plans were ruined when India captain Rohit Sharma, recovered from a back spasm which forced him to retire in the third T20 on Tuesday, and Suryakumar Yadav took 25 runs from the third over bowled by medium-pacer Obed McCoy.

By the time both openers were dismissed, India had blasted 61 runs in the powerplay.

“Conditions were not easy, we batted really well. Lot of thought with that,” Sharma said. “How we bowled was good to see as well. Pitch was so slow, and you can use that to your advantage.”

West Indies pegged back India some through the middle overs, but the visitors produced a decent ending — if not the 200 total they seemed set to earn — thanks to Hishabh Pant’s 31-ball 44, Axar Patel’s 8-ball 20 not out and Sanju Samson’s 23-ball 30 not out.

The chase sputtered as West Indies batters made starts but then were often out going for one more big hit. Captain Nicholas Pooran and Rovman Powell top-scored with 24 each.

India medium-pacer Avesh Khan, criticized for combined figures of 1-78 in the previous two games, took a match-best 2-17 after rooting out the first two wickets. He caught and bowled Brandon King and got a miscue from Devon Thomas.

“Feel really good, since I didn’t do well in the last two matches,” Khan said. “I bowled hard lengths. I just talked to my coaches and captain. They said, ‘We are backing you.’”

Pooran took the attack to Patel in the fifth over and scored 4-6-0-6-6 then ran himself out.

Patel got Kyler Mayers and Powell caught on the boundary, and West Indies was 82-5 in the ninth over. The required run rate crept to 10 and never went back under.

Arshdeep Singh dropped Jason Holder on 3 off the bowling of legspinner Ravi Bishnoi and ended up bagging the batter on 13. Singh grabbed 3-12 off 19 balls with the result already clear.

Bishnoi earned the wickets of Akeal Hosein and Shimron Hetmyer in his last over to take 2-27.

The fifth and last T20 is on Sunday on the same ground. 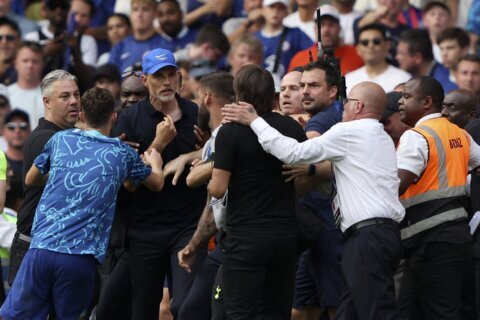