MADRID (AP) — Robert Lewandowski left his mark with a pair of goals on his 34th birthday, and Barcelona saw its high-profile attack finally click in a 4-1 win at Real Sociedad for its first victory of the season on Sunday.

Lewandowski also set up Ansu Fati’s goal as Barcelona quickly rebounded from a scoreless opening draw at home in the Spanish league against Rayo Vallecano in which the attack was ineffective.

Ousmane Dembélé also scored for the Catalan club that entered the season amid high expectations after spending big to boost its squad despite enduring financial difficulties.

“It was an important match after the setback the other day,” Barcelona midfielder Pedri González said. “We came in very motivated to get the win and that’s what happened.”

Lewandowski scored his first goal of the season a minute into the match with a nice touch from inside the area after a pass by teenager Alejandro Balde.

“He is 34 but it looks like he is only 20,” said Pedri, who is 15 years younger than the veteran Poland striker. “It’s crazy all the goals he scores and how he works to help the team.”

The hosts equalized with a goal from Alexander Isak in the sixth minute after a nice through ball by veteran David Silva, but Barcelona’s forwards stood out in the second half. Dembélé scored with a low shot in the 66th after a backheel pass by Fati, who found the net himself in the 79th after Lewandowski’s assist. Lewandowski’s second goal came from close range in the 68th after another assist by Fati.

The result kept Barcelona unbeaten against Sociedad in 13 league matches, with two draws and 11 victories.

Sociedad had opened with a win at Cádiz.

Unai Emery’s unsuccessful run against Diego Simeone is finally over.

Emery’s 12-match winless streak in the league as a coach against Simeone ended with Villarreal’s 2-0 win at Atlético Madrid.

Emery had seven draws and five losses against Simeone, his worst streak against any other coach in the league.

“It had been difficult for me against Simeone,” Emery said. “It shows how good he is. And he keeps getting better.”

Yéremy Pino and Gerard Moreno scored second-half goals at the Metropolitano stadium as Villarreal picked up its second consecutive win to start the league.

Atlético had also opened with a win, but this time Álvaro Morata and João Félix struggled in attack and the hosts couldn’t find a way past Villarreal. Morata, back from on loan with Juventus, had scored twice in the 3-0 victory at Getafe, when Félix had three assists.

Villarreal had won 3-0 at Valladolid.

After the match there were reports that Atlético player Mario Hermoso got into an altercation with some fans who allegedly insulted him.

Coach Gennaro Gattuso endured his first defeat in the Spanish league this season when Valencia lost 1-0 at Athletic Bilbao.

Álex Berenguer scored the winner in the 42nd to give Bilbao its first win of the season after an opening draw at home against Mallorca.

Gattuso had made his debut with Valencia with a 1-0 win against Girona at home.

Bilbao forward Iñaki Williams had a goal disallowed for offside late in the game at San Mamés, while Valencia striker Marcos André nearly got the equalizer deep in stoppage time with an attempt that hit the woodwork.

Defending champion Real Madrid won 4-1 at Celta Vigo on Saturday for its second consecutive win to start the league. 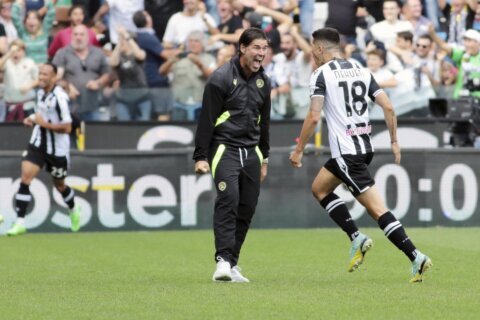