LONDON (AP) — A European Championship-record crowd of 87,192 watched England beat Germany 2-1 in the final at Wembley Stadium to cap a tournament full of memorable goals and scenes.

Chloe Kelly’s goal in the second half of extra time propelled England to its first major women’s soccer title.

Kelly took her shirt off to celebrate, earning a yellow card but also a Twitter shout-out from Brandi Chastain, who celebrated in similar style when her penalty kick won the World Cup for the U.S. in 1999. Earlier, Ella Toone had sublimely chipped the German goalkeeper to open the scoring.

There were celebrations on the field, in Trafalgar Square, and a congratulations from the queen.

The good-natured atmosphere inside the stadium Sunday drew contrasts with the violent scenes when the England men’s team lost its European Championship final to Italy at the same stadium a year ago.

Alexandra Popp had scored twice to lead Germany past France 2-1 in the semifinals — handing the French another disappointing tournament exit — but the German captain missed Sunday’s final because of a muscle strain. Popp and England’s Beth Mead were the joint top scorers at the Euros with six goals each. 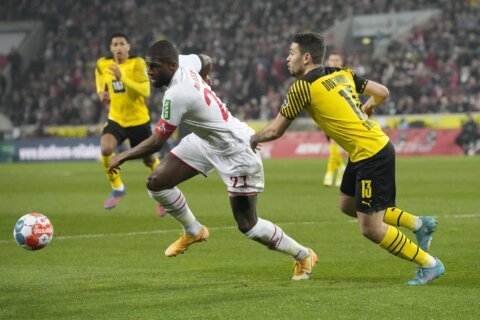