A’ja Wilson had a double-double with 22 points and 10 rebounds for Las Vegas (18-8).mJackie Young had 18 points and Kelsey Plum scored 17 for the Aces.

Cheyenne Parker added nine points, nine rebounds and five assists for the Dream. Hayes sank 11 of her 14 shots. Atlanta finished 15 of 24 from beyond the arc (62%).

Tiffany Mitchell came off the bench to score 16 of her 22 points in the first half for Indiana (5-23). Nalyssa Smith had 14 points, while Kelsey Mitchell added 12 points and five assists. Victoria Vivians scored 11 points and reserve Emma Cannon finished with 10.

Connecticut (17-9) was without Jonquel Jones, averaging a team-high 15.1 points and nine rebounds, due to health and safety protocols. 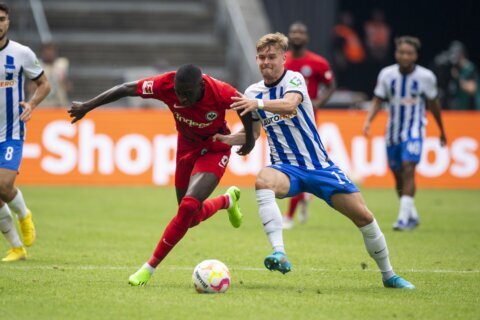 Hertha fans sing despite only drawing with Frankfurt 1-1