Netherlands edges past Portugal for 1st win of Euro 2022

SHEFFIELD, England (AP) — Daniëlle van der Donk scored the winning goal as defending champion the Netherlands got its first win at the European Championship with a team reduced by illness and injury, beating Portugal 3-2 on Wednesday.

Coming off an opening draw with Sweden, the Netherlands was without Vivianne Miedema after the star forward tested positive for the coronavirus. Three other players are either in isolation or injured.

Early on against Portugal, it didn’t seem to matter.

The Dutch team surged into an 2-0 lead inside 16 minutes thanks to headers by Damaris Egurrola and Stefanie van der Gragt, both scored from corners as Portugal failed to cope with the Netherlands at set pieces. Van der Gragt paid a price for her goal as she was struck in the face by an opponent’s boot as she dived to head the ball.

Portugal found a way back into the game when Dutch defender Dominique Janssen tripped Diana Silva and gave away a penalty converted in the 38th minute by Carole Costa. It was Silva’s turn to score the second two minutes after the break with a near-post header.

The Netherlands claimed a third goal by Jill Roord soon after but it was ruled out after a video review taking several minutes, only for van der Donk to restore the Dutch lead with a curling shot into the top-right corner.

There were signs of relief at a win which leaves the Netherlands level with Sweden on four points at the top of Group C with one game to play. Still, the Netherlands had been widely expected to win more convincingly against Portugal, the second-lowest ranked team in the tournament, which is playing as a replacement for suspended Russia.

Earlier, Sweden also claimed its first win as Hanna Bennison came off the bench to score with a thunderous shot in a 2-1 win against a Switzerland team also affected by illness.

The determined and well-organized Swiss defense kept Sweden at bay until the 52nd minute, when Fridolina Rolfö finished off a slick Swedish team move through the center. Switzerland responded immediately with a curling shot from Ramona Bachmann for the equalizer after Swedish goalkeeper Hedvig Lindahl gave away the ball.

Bennison scored the winning goal in the 79th with a powerful shot from just outside the penalty area. Sweden twice had the ball in the net late on but was offside both times.

Switzerland’s preparations for the game were disrupted when eight players and 11 members of staff had to be isolated from the rest of the team on Sunday night and early Monday morning as a gastrointestinal illness swept through the team camp.

Monday’s training session was canceled but coach Nils Nielsen was able to field a nearly unchanged starting lineup, with only one affected player, defender Rahel Kiwic, moving to the bench. 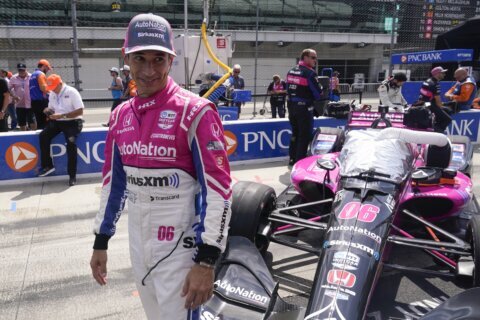