KITZBÜHEL, Austria (AP) — Third-seeded Roberto Bautista Agut will have to wait to find out who he will play in…
Listen now to WTOP News WTOP.com | Alexa | Google Home | WTOP App | 103.5 FM

KITZBÜHEL, Austria (AP) — Third-seeded Roberto Bautista Agut will have to wait to find out who he will play in the final at the Generali Open as rain delayed play for the second straight day.

After jumping to a 5-2 lead in the second set, Bautista Agut failed to serve out the match twice, wasting three match points on the way before converting the first match point of the tiebreaker.

“It was a really tough end,” Bautista Agut said.

He will seek his 11th ATP title, and the second this year. It’s his first final on clay since 2018 in Gstaad.

Their semifinal match was suspended due to rain with Misolic leading Hanfmann 1-0 in the decisive third-set tiebreaker after the two split the previous two sets 6-2. 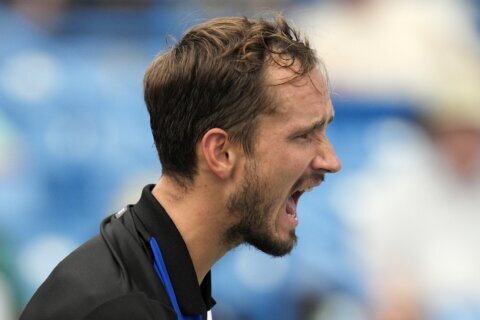