BARCELONA, Spain (AP) — Xavi Hernández can scratch the last item off his wish list after Barcelona struck a deal for France defender Jules Koundé on Thursday.

Barcelona said that Sevilla agreed to transfer the highly touted center back for a still-undisclosed sum. The deal will be complete after the 23-year-old Koundé undergoes a medical exam.

Koundé, who also drew interest from Chelsea, will provide Barcelona’s coach a skilled and versatile defender as the team tries to transition beyond a backline still led by the 35-year-old Gerard Piqué.

The France international will join Ronald Araújo (23) and Éric García (21) as Barcelona’s young core of central defenders playing with Piqué.

Koundé would be Barcelona’s third major signing after it sold 25% of its Spanish league television rights for the next 25 years as it tries to both claw its way out of staggering debt and rebuild a competitive team after winning nothing last season.

Xavi had asked club president Joan Laporta for a top striker and a quality defender to get his squad back to challenging for titles.

Already this month Barcelona secured the transfers of striker Robert Lewandowski from Bayern Munich and winger Raphinha from Leeds for around a combined 110 million euros ($111 million).

Koundé, both fast in defense and an attacking threat on set pieces, has been considered one of the most promising young players at his position in the Spanish league since joining Sevilla in 2019 for 25 million euros ($25.4 million) from French club Bordeaux.

Koundé helped Sevilla win the Europa League in 2020 and scored nine goals in 133 appearances for the Andalusian club. He also won the 2021 Nations League with France, which beat Spain the final.

In a statement, Barcelona said it is getting a player who “is very difficult to beat one on one and is comfortable defending high up the pitch.”

Koundé has also shown his versatility by playing as a full back on occasions under Sevilla coach Julen Lopetegui.

Barcelona has also added midfielder Franck Kessie and defender Andreas Christensen, who arrived as free agents this offseason, in addition to signing Ousmane Dembélé to a new contract.

Barcelona, currently on a preseason tour in the United States, opens the season at home against Rayo Vallecano on Aug. 13. 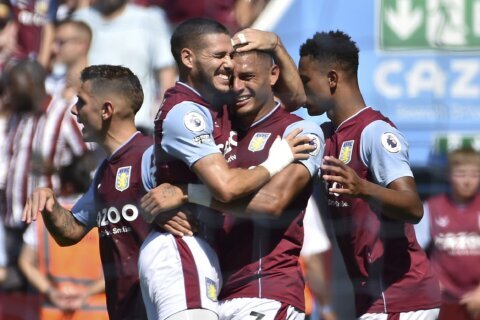