De Groot won her seventh straight major singles title and fourth overall at Wimbledon on Saturday by beating Yui Kamiji of Japan 6-4, 6-2 on No. 3 Court.

It was the Dutchwoman’s 15th singles title at one of the four biggest tournaments in tennis, second only to Vergeer’s 21.

“I’m getting pretty close. I know this. But her achievements really stand on itself,” de Groot said. “For 10 years she wasn’t beaten. Those are records that no one’s going to beat.”

De Groot is doing a pretty decent job of trying, though.

She won her first Wimbledon singles title in 2017 in only her second appearance at a major tournament. Overall, she has won 15 major titles in 21 tournaments.

But chasing the legacy of Vergeer isn’t something that motivates her.

“I think if I sort of try and challenge that, I might even end up sad at the end of my career. Even though I had such a big and very impressive career, I’ll be sad because I didn’t beat her record,” de Groot said. “So I’m definitely not really looking at how she was. I think we all have to honor what she did and what she meant to the whole wheelchair tennis community.”

De Groot will be going for a second straight calendar-year Grand Slam at the U.S. Open, a tournament she has won the last four years.

She won’t have much competitive preparation, however.

De Groot isn’t finished yet at Wimbledon anyway. She has reached the doubles final with teammate Aniek Van Koot. They will face Kamiji and Dana Mathewson for that title, which would also be her 15th in women’s doubles.

Playing so many matches on the beautiful green lawns at the All England Club isn’t so easy for wheelchair athletes, however.

“Competing on grass for us is really tough,” de Groot said. “I think where on hard court we push the chair and we reach the end of the court, for grass it’s maybe two meters (yards), maybe not even. It’s a constant effort that you have to put in to keep, keep pushing. That makes it physically very tough.” 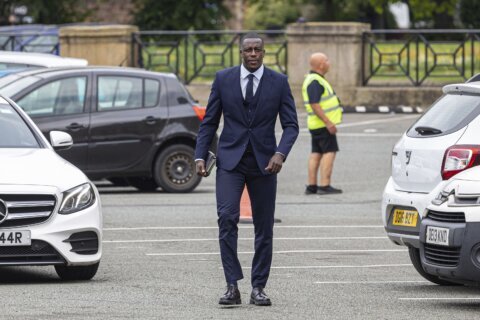