Sky rally from WNBA-record 28 down to beat Aces

LAS VEGAS (AP) — Courtney Vandersloot scored 25 points and the Chicago Sky completed the biggest comeback in WNBA history, rallying from 28-down to beat the Las Vegas Aces 104-95 on Tuesday night.

The previous record was a 25-point rally most recently done in 2013 by the Sky.

Las Vegas shot 63% from the field in the first quarter, and scored 41 points to set a franchise record for points in a quarter. But Chicago outscored Las Vegas 59-25, after falling behind by 28 points, to enter the fourth quarter with a lead.

The win means the two teams split their head-to-head meetings so homecourt for the WNBA Commissioner’s Cup championship game will come down to the second tiebreaker. That’s point differential in the cup games and the Aces have a huge lead over the Sky with two games left to play.

Atlanta (8-8) equaled its win total from last season with the win.

Aari McDonald drove into the lane and sank a floater to give Atlanta a 77-72 lead. Marina Mabrey made a long 3-ponter with 29.8 seconds left to pull Dallas within 79-75 but she missed one on their next possession after Howard made one free throw.

McDonald finished with 15 points and Cheyenne Parker had 14 for Atlanta.

Minnesota, which won in Phoenix for the 10th straight time, went on a 20-8 run, capped by a corner 3-pointer by Bridget Carleton, to take a 70-61 lead.

Los Angeles (6-9) led 77-61 before Washington started a comeback. Natasha Cloud made back-to-back 3-pointers and she found Ariel Atkins in the corner for a four-point play. During the timeout between Atkins’ 3-pointer and free throw, the officials reviewed a Liz Cambage basket and ruled it came after the buzzer to reduce Los Angeles’ lead to 77-71.

Atkins scored 22 points and Myisha Hines-Allen had 17 points and eight rebounds for Washington (11-8). 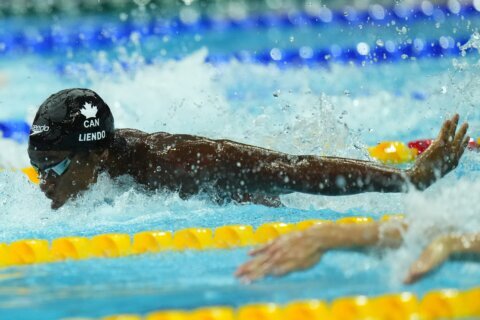