The Irish (41-15) carried over their momentum from eliminating No. 1 national seed Tennessee in the super regionals with a strong all-around performance against the program making its record 38th appearance in Omaha.

“It was fun for you and the fans and the country that watched our team because I feel like when we’re playing well, that’s what we do,” Irish coach Link Jarrett said. “I’m very proud of them to come into this atmosphere and perform for the first time that well-rounded of a game against clearly a phenomenal program.”

Notre Dame will play Oklahoma on Sunday. The Longhorns (47-21) will face rival Texas A&M in an elimination game.

“It just wasn’t our day,” Texas coach David Pierce said. “We couldn’t get that flow going and we just couldn’t get their traffic off the bases all day. We were constantly under stress defensively and pitching.”

Bertrand (10-3), roughed up in his start against Tennessee last week, limited the Longhorns to three runs on six hits in 5 1/3 innings. Alex Rao and Jack Findlay gave up no hits in 3 1/3 innings, with Findlay earning his fourth save.

The Irish scored six runs on nine hits against Texas starter Pete Hansen (11-3). They picked up single runs on Jared Miller’s home run in the first inning, an RBI groundout in the third and a safety squeeze in the fourth, and they scored three more in the fifth on Tristan Stevens’ balk and a couple singles.

Carter Putz’s homer in the ninth gave the Irish a four-run lead.

“When you come out of the corners in a boxing match and you can land the first blow, it’s a really good feeling,” Jarrett said. “It gives you the momentum and the mojo, and when you’re coaching the game with the lead, you have some options … and the playbook opens up a little bit more.”

The Longhorns arrived in Omaha with a program-record 128 homers, most among the CWS teams and fourth nationally, and had hit three or more in each of its previous four games.

They mustered only six singles against the Irish and were the only team in the first two CWS games to not hit a homer.

Douglas Hodo II had an RBI single, and the Longhorns scored on a squeeze play and wild pitch.

It was the first game this season that Texas didn’t have an extra-base hit.

Last year, the Longhorns lost their CWS opener and then won three straight to reach their bracket final, where they lost to eventual national champion Mississippi State.

“We’ve been in this situation before,” Stevens said. “We can’t look three games ahead, two games ahead. Our next target is A&M.”

The Longhorns’ Dylan Campbell came home on Eric Kennedy’s bunt in the third. Bertrand picked it up and threw to second for the force rather than try to get Campbell at the plate.

In the fourth, Hansen flipped to catcher Silas Ardoin after fielding Spencer Myer’s bunt, but the Irish’s Jack Brannigan was able to touch the plate with his hand just ahead of Ardoin’s sweep tag. Brannigan was called out initially but ruled safe after a video review.

Paul Mainieri, who coached Notre Dame in its previous CWS appearance in 2002, watched from a stadium suite with Brian O’Connor, who was the team’s pitching coach.

Mainieri went on to coach at LSU from 2007 until he retired last year. O’Connor left to become head coach at Virginia in 2003 and has been there since.

Two-time Super Bowl champion Peyton Manning watched the game from the stands. Fittingly, the retired quarterback wore a hat bearing his signature line at the line of scrimmage: “OMAHA!” 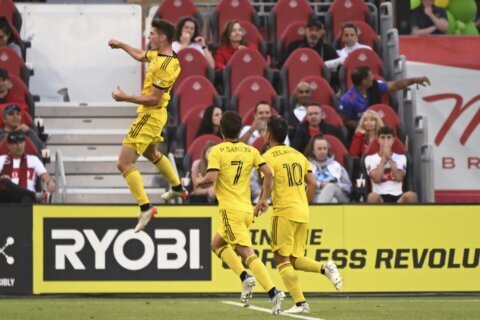