LAFC hopeful Bale can join club within a couple weeks

LOS ANGELES (AP) — John Thorrington confirmed Sunday that Gareth Bale is joining Los Angeles FC. The timing of when that will happen remains a bit unsettled.

Thorrington, LAFC’s co-president and general manager, said after Sunday’s match against the New York Red Bulls he is hopeful Bale can arrive stateside in the next week to 10 days once all the immigration paperwork is completed.

Bale will be eligible to make his LAFC debut after the secondary transfer window opens July 7. The club’s first match after the window opens is against archrival LA Galaxy on July 8.

Thorrington left open the possibility of Bale making his debut in the rivalry game commonly known as El Trafico, but that they want to assess his fitness and match readiness first.

“With our sport science team and coaches understanding how to manage a player, like Gareth, who, whether you call them a thoroughbred racehorse or Ferrari, whatever your analogy is, they do need extra attention and, care and management in order to put them in a position to succeed,” Thorrington said. “That is certainly our intention here, and we’re confident that we will be able to do that.”

While most people are wondering if Bale’s arrival in Major League Soccer is primarily to help him prepare to lead Wales in the World Cup later this year, Thorrington sees Bale’s addition as another piece to help LAFC win its first MLS Cup.

LAFC has been one of MLS’ top clubs since starting play in 2018. It won the Supporters Shield as the league’s top team in the regular-season in 2019, but has not had postseason success. It missed the playoffs for the first time last year.

The regular season ends Oct. 9, with the MLS Cup Final scheduled for Nov. 5. Wales’ first World Cup game in Qatar is Nov. 21 against the United States.

“The benefit of him joining a group like we already have is we’ll play him as much as we can. We expect him to be a top, top player for us and in this league, but we will do so sensibly,” Thorrington said. “I think when Gareth is looking at what he needs to do, his priority will be at LAFC. But we’re not naïve to the fact that he like some other players of ours have a World Cup on the horizon. How we manage his preparation ahead of that will be important to Gareth and for the success of LAFC.”

Bale’s contract with Real Madrid expires at the end of the month. He scored 106 goals in 258 appearances for Real Madrid, which won five Champions League titles and three La Liga crowns during his nine-year tenure.

Bale isn’t the only addition for LAFC. Italian defender Giorgio Chiellini is likely to be the first to arrive after agreeing to a contract a couple weeks ago. Chiellini played 17 seasons at Juventus and also played internationally for Italy, which did not qualify for the World Cup.

Thorrington also confirmed that former MLS MVP Carlos Vela has agreed to an extension. The Mexican striker’s deal was supposed to expire after Wednesday’s match against FC Dallas. Vela has six goals this season.

“I think somatically it speaks to the interest of these players who still have a lot to give to a club,” Thorrington said. “This is a unique opportunity for a player like them at this stage in their career to do something a little bit different. But their priority is to come to win.” 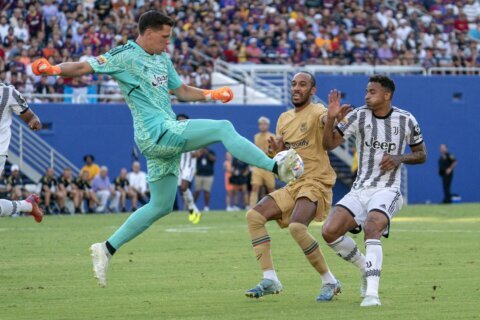