LONDON (AP) — There’s going to be another midfielder named Vieira at Arsenal.

Fabio Vieira is headed for the English club after Porto reached an agreement with Arsenal for the sale of the 22-year-old midfielder for a fee that could reach 40 million euros ($42 million), the Portuguese champions said Friday.

In a statement sent to the Portuguese Securities Market Commission, Porto said Vieira will cost 35 million euros ($36.7 million) outright plus 5 million euros ($5.25 million) more linked to “sporting goals.” The deal is expected to be finalized in the coming days.

Patrick Vieira, a former France international, was one of Arsenal’s greatest ever players, winning three Premier League titles and four FA Cups in his nine years at the club from 1996-2005. He is currently the manager of Crystal Palace in the Premier League.

The two are not related.

Fabio Vieira hasn’t played for Portugal’s senior national team but has appeared for the country’s youth teams. He was voted as the best player in last year’s under-21 European Championship.

Vieira will add a further element of youth to a young squad being nurtured by manager Mikel Arteta that also contains highly rated players like Bukayo Saka, Emile Smith Rowe and Gabriel Martinelli.

Arsenal, which again missed out of qualification for the Champions League, is shopping in a different part of the transfer market than England’s biggest clubs at the moment and is focusing on up-and-coming talent as opposed to established stars. 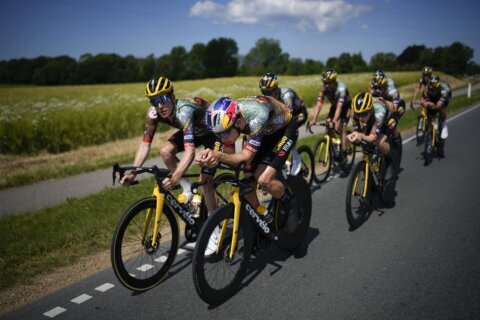