BARCELONA, Spain (AP) — When Brazil great Ronaldo bought Spanish club Valladolid almost five years ago, the idea was to turn the modest side into a solid team in a glamorous top tier including his former clubs Real Madrid and Barcelona.

The intention wasn’t for Valladolid to play soccer in the second division — with less famous opponents like Ponferradina and Amorebieta — as happened after the northern Spain side was relegated at the end of the 2020-2021 campaign.

On Sunday Valladolid can seal its immediate return to Spain’s major league. But it will need some help to do so.

Eibar, Almería and Valladolid all play matches at the same time (1800 GMT) on the final day of the season, hoping to finish in the top two spots that earn automatic promotion.

The third-place team will enter a four-team playoff to decide the third promoted team.

Eibar enters the 42nd and final round as leader, ahead of Almería on the head-to-head tiebreaker with both on 80 points. Valladolid is two points behind the front-runners in third place.

Valladolid needs to win its match at home against Huesca and then hope for either Eibar to drop points or for Almería to lose. In the case of a tie on points, Valladolid has the better head-to-head record over Eibar, while Almería holds the head-to-head tiebreaker over Valladolid.

In the case of a three-way tie, Valladolid and Eibar would finish one-two, with Almería in third, based on the points won by each team in games played against each other.

Ronaldo, a two-time World Cup winner and a former Real Madrid and Barcelona striker, bought a 51% stake Valladolid in 2018 when it was in the first division.

“We have to believe until the end, supporters, next Sunday we will fill the Zorilla (stadium),” Ronaldo wrote on Instagram after Valladolid beat Ibiza 2-1 last weekend.

Eibar travels south from the Basque Country to play at Alcorcón near Madrid needing a win to ensure it returns to the first division one year after being relegated.

Some loyal Eibar fans slept all night outside its stadium to snatch up the 300 tickets available for the away match.

“Our success is collective, it is made possible by the players and our fans,” said Eibar defender Anaitz Arbilla. “Having that communion makes you stronger. Our fans are happy with how we are playing, we are very proud of how they have supported us.”

Almería, which missed a chance to clinch promotion in the last round, visits Leganés also near Madrid.

A win would return Almería to the first division for the first time since the 2014-2015 season.

Almería forward Juan Villar said that he is counting on his team’s more experienced players to handle the pressure. He helped former club Osasuna earn promotion in 2019.

“Our team has players who have played in important matches and we are going to help our teammates,” Villar said. “These are not normal games. You have to know how to handle lots of things, understand the moment and keep a cool head.”

Tenerife and Girona are already guaranteed spots in the playoffs. The fourth and final slot will go either to Las Palmas or Oviedo. 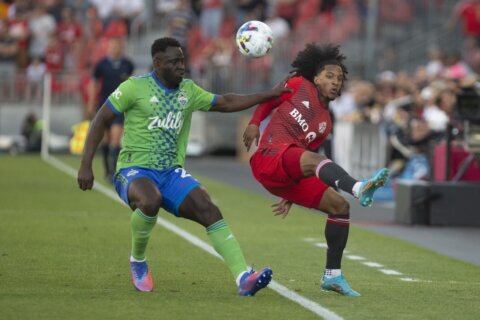