TULSA, Okla. (AP) — A brief look at the third round Saturday of the PGA Championship at Southern Hills:

Tiger Tracks: Tiger Woods withdrew after shooting 79 on Saturday, his worst round ever in a PGA Championship.

Round of the day: Webb Simpson made three birdies and an eagle on the back side to shoot 65 and go from making the cut on the number to a tie for 10th at 1 under.

Shot of the day: Cameron Young drove the par-4 17th and made the eagle putt during a round of 67 that moved him into fourth place at 5 under.

Fading away: Justin Thomas followed back-to-back 67s with a 74 that left him tied for seventh at 2 under.

Key statistic: With wind switching directions and coming from the north, the average driving distance at the par-4 13th went from 351 yards on Thursday and 347 on Friday to 285 yards on Saturday.

Notable: The last player whose first PGA Tour win was also a major was Keegan Bradley at the 2011 PGA Championship.

Quotable: “If you play really good golf during the week, you’re going to win. Doesn’t matter your first time or your 10th time.” — Pereira 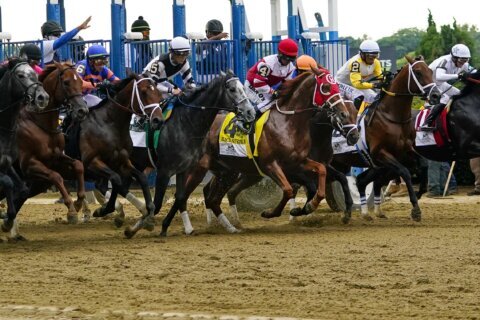