Manchester City can move in front of Liverpool again in the Premier League title race when it visits Wolverhampton. City, the defending champions, are tied on points with Liverpool but have a game in hand. After Wednesday, the two title rivals will have only two more league games to play. Relegation-threatened Leeds hosts Chelsea in what could be a tricky matchup for the visitors. Thomas Tuchel’s third-place team seems all but assured of a Champions League spot and is also looking ahead to its FA Cup final against Liverpool on Saturday. Everton will try to put some room between itself and the bottom three when it visits relegated Watford. Leicester hosts Norwich, which also has been relegated.

Sevilla and Atlético Madrid can clinch Champions League spots with victories in their Spanish league matches. Sevilla hosts relegation-threatened Mallorca and Atlético visits Elche. Third-place Sevilla could move seven points ahead of fifth-place Real Betis with two rounds to go. The city rival kept its chances alive by defeating Valencia 3-0 on Tuesday. Fourth-place Atlético can open a six-point lead over Betis, which would be enough because it has a better head-to-head tiebreaker with Betis. Last-place Alavés tries to stay alive in the fight against relegation when it hosts Espanyol. Getafe, five points from the relegation zone, visits mid-table Osasuna. 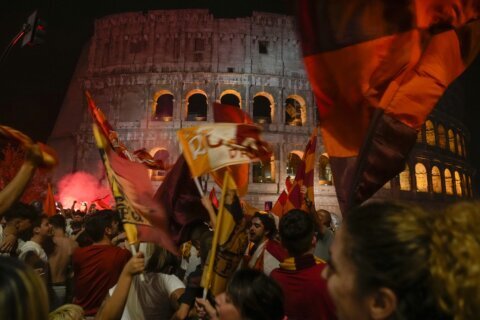