According to a statement released by the department, the decision was made “after multiple reviews and analyses of evidence gathered in the investigation of the former agents, and reflects the recommendation of experienced prosecutors.”

An internal investigation by the Justice Department Inspector General released in July 2021 found that the FBI made fundamental errors in the probe and did not treat the case with the “utmost seriousness” after USA Gymnastics first reported the allegations to the FBI’s field office in Indianapolis in 2015. The FBI has acknowledged its own conduct was inexcusable.

According to the report, investigators in Indianapolis first learned of the allegations in 2015, but did not open an investigation in Michigan, where Nassar worked, until October of 2016. But, as several gymnasts have told authorities, the doctor abused additional victims after the allegations were first brought to the FBI’s attention. 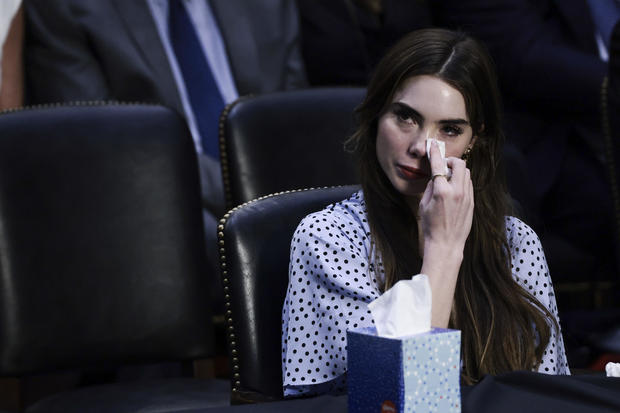 U.S. Olympic Gymnast McKayla Maroney wipes tears from her eyes as Sen. Chris Coons (D-DE) speaks during a Senate Judiciary hearing about the Inspector General’s report on the FBI handling of the Larry Nassar investigation of sexual abuse of Olympic gymnasts, on Capitol Hill on September 15, 2021, in Washington, DC.

The report revealed that the Justice Department first declined to prosecute the two in September 2020.

That decision was reviewed in October after Deputy Attorney General Lisa Monaco told Congress criminal investigators were taking in new information that had emerged.

“I am deeply sorry that in this case, the victims did not receive the response or the protection that they deserved,” Monaco said as she testified during a hearing on the renewal of the Violence Against Women’s Act.

Thursday’s announcement indicates the new information Monaco referenced was not enough to reverse course, explaining that while there were “serious concerns” about how the former agents handled the sexual assault allegations — including by providing inaccurate or incomplete information to investigators — “the Principles of Federal Prosecution require more to bring a federal criminal case,” the statement read.

Several of Team USA’s top gymnasts testified before a Senate Judiciary Committee last year, saying institutions such as the FBI had failed them after they reported the abuse.

“What is the point of reporting abuse if our own FBI agents are going to take it upon themselves to bury that report in a drawer?” gymnast McKayla Maroney told the panel. “They had legal, legitimate evidence of child abuse, and did nothing.”

Maroney spoke in detail about how she had spoken to the FBI in the summer of 2015 and provided “extreme detail” into Nassar’s abuse. But the FBI did not investigate her claims until more than a year later, a Justice Department investigation found. Maroney told the Senate Judiciary Committee that her interview with the FBI was not documented until 17 months later, and she accused the FBI of making “entirely false claims” about what she told them.

One week after the gymnasts’ testimony, the FBI agent in charge of the Nassar investigation was fired.

Nassar, who was the team doctor for USA Gymnastics for 18 years, has been accused of abuse by over 250 women and girls. He was sentenced in 2018 to over 100 years in prison.

FBI director Christopher Wray, who did not lead the FBI at the time in question, has said the agency made “totally unacceptable” errors in investigating Nassar. In September 2021, he told the Senate Judiciary Committee that FBI agents “betrayed the core duty that they have of protecting people” and “failed to protect young women and girls from abuse.”

Wray was once again pressed about the Nassar investigation by senators on Wednesday.

“It’s hard for me to explain to you how angry and upset I was when I learned what the FBI did and failed to do back in 2015,” Wray said Wednesday. “I’m determined to make it right now that I’m here.”