PARIS (AP) — Kylian Mbappé’s decision to stay with Paris Saint-Germain was widely celebrated in the French league, even by coaches who still have to defend against the prolific forward next season.

Mbappé ended months of speculation when he signed a new three-year deal on Saturday. He again snubbed Spanish giant Real Madrid, which failed to buy him in 2017 as he joined PSG from Monaco for 180 million euros ($190 million). Madrid had the same offer for Mbappé knocked back by PSG last year, when he had only one year left on his old contract.

Mbappé posted on Twitter Sunday that he is convinced he can “continue to grow at PSG. But France’s World Cup-winning star also said he was honored by Madrid’s interest in him.

“I understand the luck and privilege I had to be coveted by such an institution,” Mbappé wrote. “I will be the first to support them in the Champions League final (on Saturday against Liverpool) in Paris. At home.”

“I would have been sad to see him go,”Kombouaré said. “It’s brilliant that he’s in the French league. It would have been a big blow for us if he had left. It’s important for French football.”

Nice coach Christophe Galtier’s side eliminated PSG from the French Cup, drawing and beating the French champion in the league and without conceding a goal in the three games.

So Galtier found a way to keep the 28-goal league top scorer Mbappé quiet, then, but still thinks the forward’s presence is “very important” to the league’s development.

“He’s the driving force of our championship and it will obviously give the league a lot of visibility,” Galtier said. “Personally, I’m very happy that he’s staying in our league for all the television viewers and all the fans coming to the stadium. It’s always good to see world-class players.”

The French league’s president Vincent Labrune joined in with the feelgood factor.

“Mbappé’s decision to stay is a strong sign for the present and future of our league. Top scorer and passer (in the league), a world icon of football, (he) will continue to make history in Ligue 1. It’s a source of immense pride,” Labrune said. “The LFP’s (league’s) ambition is to make Ligue 1 one of the leading championships. To keep making it more interesting we need big stars. Mbappé is a superstar … More than ever, Ligue 1 is the league of talents.”

France has long been known for producing outstanding young players, like Mbappe, who then join big clubs in financially far stronger leagues like the Premier League in England.

However, none of the other French clubs could afford to keep Mbappé and offer him huge wages the way PSG can.

While Mbappé came through the French league’s outstanding youth academies — considered the best in Europe along with Spain — others like striker Anthony Martial left the country at a younger age.

The latest to go this time is 22-year-old Marseille midfielder Boubacar Kamara, recently called up to the France squad for the first time. He announced his departure from Marseille on Sunday, without saying which club he will join.

Monaco’s highly-rated France midfielder Aurélien Tchouaméni is the same age and is expected to join a big club, with both Real Madrid and Liverpool reportedly chasing his signature. 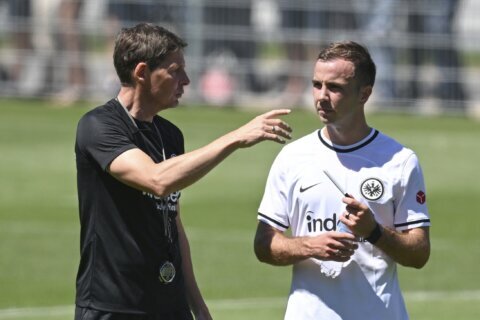