Celta player Mina sentenced to 4 years in prison for abuse

MADRID (AP) — Spanish soccer player Santi Mina was sentenced to four years in prison on Wednesday after being found guilty of sexual abuse.

The 26-year-old Celta Vigo forward will have to serve time if his appeal is unsuccessful.

The Spanish court also handed Mina a restraining order prohibiting him from approaching the victim for the next 12 years. In addition, he was ordered to pay 50,000 euros ($52,600) in damages.

Mina won’t be allowed to get within 500 meters (yards) of the victim or her home, or to try to establish any type of contact with her.

Mina was cleared of the sexual assault charge he was also facing, which is associated to intimidation or violence against the victim.

Mina’s defense team said it would appeal the decision based on errors committed during the trial, according to the Spanish news agency EFE.

Celta said it preventively removed the player from its squad until the appeal process is over. It also opened disciplinary proceedings do determine the options the club can take.

The state prosecutor was asking for eight years of prison for Mina, while the victim’s lawyers were seeking 9 1/2 years.

David Goldar, who played for lower-division club Ibiza, was found not guilty after being accused of being an accomplice. The woman’s lawyer was asking for 4 1/2 years in prison for him.

Mina and Goldar said the woman consented to the sexual relations.

The woman accused Mina of raping her in a camper van in 2017, where she had gone with Goldar. Her lawyer said Goldar did nothing to stop Mina from raping her.

At the time, Mina was playing for Valencia. He returned to his boyhood club in Vigo in 2019.

He was a starter in Celta’s 1-1 home draw at Granada in the Spanish league on Sunday. He has also appeared in four games in April.

“Celta respects the player’s right to defense but is obligated to take measures against events that notoriously undermine the image of the club and directly attack its values,” the club said in a statement after Mina’s sentencing. 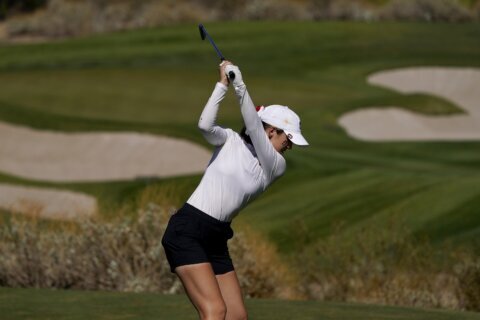