Bayern sporting director Hasan Salihamidžić said on Saturday the Polish star has turned down the club’s offer of a contract extension and “he would like to do something else.”

The 33-year-old Lewandowski’s deal with Bayern runs for another season, but he has urged the club to consider any offers that arrive in the meantime.

“Yes, I have another year on my contract,” Lewandowski said after scoring his 35th Bundesliga goal of the season in Bayern’s 2-2 draw at Wolfsburg. “If an offer comes, we have to think about it, also for the club. Both sides have to think of the future. I can’t say any more. We have to see what happens.”

Lewandowski has been linked with a move to Barcelona, but Salihamidžić said there had been no contact from the Spanish club and Bayern was under no obligation to sell.

“Lewa has a contract till the summer of next year. That is a fact,” Salihamidžić said.

Asked what would need to happen for Bayern’s stance to change, he replied, “I’m not concerning myself with that because our position has always been clear.”

Broadcaster Sport1 reported Lewandowski’s agent, Pini Zahavi, and Barcelona had verbally agreed on a three-year deal and the club was waiting for Bayern to give an indication of what transfer fee it might consider to strike a deal.

Lewandowski has 312 goals in 384 Bundesliga games for Bayern and former club Borussia Dortmund.

He is the league’s top scorer for the fifth season in a row and the seventh overall. He broke the old record for Bundesliga goals scored in a season with 41 last year.

Liverpool striker Sadio Mané and Stuttgart forward Saša Kalajdžić have been touted as possible replacements for the Polish striker at Bayern. 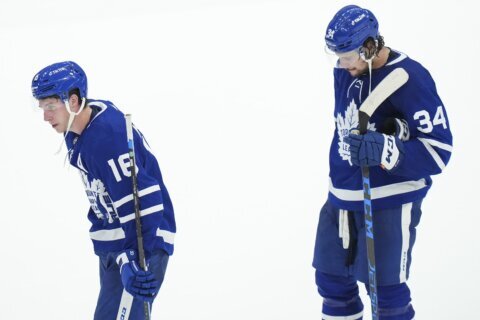 Maple Leafs say Mitch Marner was victim of a carjacking