LONDON (AP) — Headers from defenders Gabriel and Rob Holding nudged Arsenal closer to a return to the Champions League with a 2-1 victory at West Ham in the Premier League on Sunday.

The goals from corners in each half provided an instant response to Tottenham beating Leicester 3-1, ensuring Arsenal retained its two-point lead in fourth place over its north London rival. The remaining four games include a derby trip for Arsenal to Tottenham on May 12.

But Nketiah did force a save from goalkeeper Lukasz Fabianski that led to the corner that the opener was scored from in the 38th minute. Saka picked out Holding, who nodded in his first Premier League goal almost six years after his debut.

Declan Rice was at the heart of West Ham’s response that saw the hosts level just before halftime. The midfielder drew a smart save from goalkeeper Aaron Ramsdale before launching the move that led to a goal. A long pass into the box found Vladimír Coufal and the Czech defender controlled the ball brilliantly before picking out Bowen, whose shot deflected off Gabriel and into the net.

The second half started at a frantic pace as Bowen was shown a yellow card for simulation as he avoided Ramsdale’s lunge, amid a breathless spell for West Ham that ended abruptly when Arsenal scored again.

Once again the visitors pounced from a corner as the ball found Gabriel Martinelli, who crossed to his unmarked namesake and fellow Brazilian for a diving header that beat Fabianski at the far post in the 54th minute.

A flare hurled from the away fans’ section was cleared off the pitch and play resumed with Nketiah failing to make the most of a strong chance as Arsenal broke incisively.

Nketiah’s wasteful afternoon continued as he sent his best opportunity yet wide of the right post, but Arsenal had already done enough for the win that ended seventh-place West Ham’s hopes of qualifying for the Champions League through the Premier League. It can still qualify by winning the Europa League but the east London club must first overturn a 2-1 deficit against Eintracht Frankfurt in the semifinals on Thursday.

Arsenal qualified for the Champions League for 19 successive seasons until failing to do so in 2017.

Penguins GM: “in a perfect world” Malkin and Letang stay 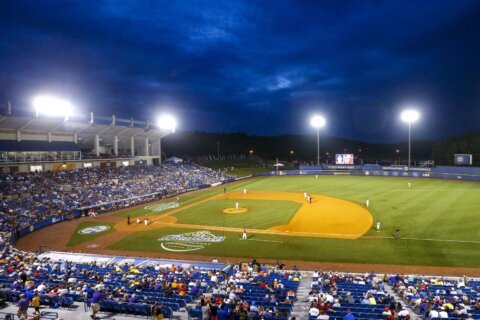