After great start, Alcaraz heads to Paris among favorites

MADRID (AP) — It’s been a quick rise for Carlos Alcaraz.

It wasn’t long ago that the 19-year-old Spaniard was playing in youth tennis tournaments and talking about his idols Rafael Nadal and Roger Federer, and about his dream of one day making it into the top 10 and winning the French Open and Wimbledon.

It was only a year ago that he broke into the top 120 for the first time and began making his way into the main tournaments.

Few at the time could predict what the future held for the young Spaniard. But come next week in Paris, Alcaraz will be among the favorites to win the French Open.

The Spaniard is tennis’ newest sensation and the hottest player on tour this year, considered by many the successor of Nadal.

Alcaraz won the Madrid Open on Sunday for his tour-leading fourth title of the season, lifting the trophy after back-to-back victories over Nadal, top-ranked Novak Djokovic and third-ranked Alexander Zverev.

“I remember the first time when I was playing, when I was a kid in (the Spanish city of) Murcia, and of course I didn’t imagine at that moment that I was going to be able to reach this level, to be here right now, winning the Madrid Open,” he said.

Alcaraz is the second youngest player to reach the top 10 and second youngest to win two Masters 1000 tournaments. Only Nadal did both at a younger age in 2005 when he was 18.

“I can see him becoming big in a very short time,” fifth-ranked Stefanos Tsitsipas said. “I’d really like to get to the level he is right now. I think he’s one of the best players in the world, to be honest. He has proved it with consistent results, thriving in the biggest tournaments. There is nothing you can take away from that.”

Alcaraz leads the tour with 28 victories this year, one more than Tsitsipas. His only three losses came against Sebastian Korda in Monte Carlo, Nadal in Indian Wells and Matteo Berrettini in the Australian Open.

He is the youngest player in the history of the ATP Tour to defeat three of the top five players at the same event, and the first to eliminate Nadal and Djokovic at the same clay-court event.

Djokovic and Nadal had only praise for the youngster, with Djokovic saying it was “impressive for somebody of his age to play so maturely and courageously.” Nadal said Spain should celebrate having “an amazing player for a lot of years to come.”

Alcaraz was on the front pages of most sports dailies in Spain on Monday, taking the main headlines even though Real Madrid and Atlético Madrid faced each other in the Spanish league derby on Sunday.

“Blessed,” the AS newspaper said of Alcaraz.

Looking more mature than his age, Alcaraz has impressed with a complete game that is highlighted by a devastating forehand and precise drop shots. He didn’t concede a single break opportunity to Zverev in Sunday’s final in Madrid.

Alcaraz will not play in Rome this week so he can fully heal from a right ankle injury he sustained in the quarterfinals against Nadal in the Spanish capital.

The youngster will head to Roland Garros, where Nadal is a record 13-time champion, at a career-high No. 6. He reached the third round in Paris in his debut last year, losing to Jan-Lennard Struff in three sets.

“I think that people are going to think that I’m going to be one of the favorites to win Roland Garros,” Alcaraz said. “I don’t see it as pressure, I see it as motivation. I really look forward to going to Paris, to fighting for the Grand Slam, and I am really looking forward to showing my great level in a Grand Slam as well.” 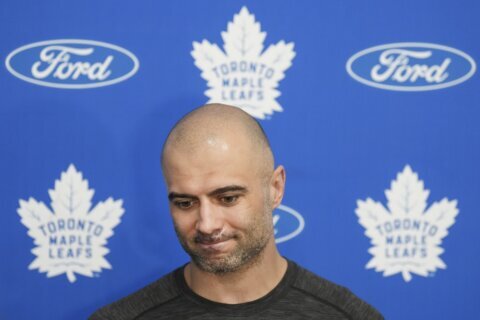