BERLIN (AP) — It was the day they’d been waiting for. Union Berlin and its supporters celebrated the end of…
Listen now to WTOP News WTOP.com | Alexa | Google Home | WTOP App | 103.5 FM

BERLIN (AP) — It was the day they’d been waiting for.

Union Berlin and its supporters celebrated the end of coronavirus restrictions on Friday with a noisy 1-0 win over Cologne in a Bundesliga game played in front of a sell-out 22,012-capacity crowd.

Taiwo Awoniyi’s 12th league goal of the season helped Union overtake the visitors to move to seventh with six games of the season remaining.

But that was just the cherry on top for Union’s ecstatic fans.

Even the ultras who boycotted the club’s last game in a full stadium – the 2-0 win over Hertha Berlin on Nov. 20 – returned. The diehard supporters skipped the derby in protest against mask wearing and other restrictions meant to limit the risk of COVID-19 infections. Germany was going through its fourth wave at the time and only fans who showed proof of vaccination or recovery were allowed to attend. No alcohol was served at the derby.

All those precautions were scrapped on Friday, the day that almost all coronavirus restrictions were dropped in Berlin despite stubbornly high infection rates across the country.

Both Union and Cologne supporters marked the occasion by lighting flares before the game. The match itself arguably failed to live up to the pyrotechnics show as both teams canceled each other out in a hard-fought struggle.

A mistake from Jonas Hector decided it. The Cologne captain played the ball across his goal but apparently failed to see Awoniyi, who gratefully accepted the pass and fired past goalkeeper Marvin Schwäbe in the 49th minute.

It helped Union end its three-game run without a win.

“It probably doesn’t get any better,” Union coach Urs Fischer said of the fans’ return and his own team’s 41 points. Union’s initial target was survival in its third ever season in the Bundesliga. Now it can again challenge for European qualification.

Cologne was without top-scorer Anthony Modeste due to illness. 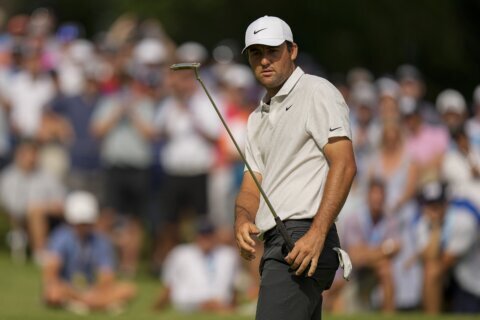