Scottie Scheffler left a birdie putt short on the final hole Friday but still shot a 5-under 67 to take a five-shot lead into the weekend at the Masters.

The world’s No. 1 player bogeyed two of his first three holes but did little else wrong to finish 36 holes at 8-under 136. Charl Swartzel, Sungjae Im, Shane Lowry and Hideki Matsuyama were tied for second at 3 under.

The five-shot margin ties the biggest 36- hole lead at the Masters. Four others had the same lead and all went on to win, including Jordan Spieth in 2015.

Playing in just his third Masters, Scheffler conquered Augusta National on a day when the average score was 74.6. He made seven birdies on the last 15 holes after opening with a bogey on No. 1 and adding another on the third hole.

His play continues a remarkable year that has seen him climb to the No. 1 ranking. Scheffler won this year in Phoenix, then took the Arnold Palmer Invitational before winning the Match Play tournament last month.

Tiger Woods had an up and down day but managed to post a 2-over 74 on Friday to make the weekend at the Masters.

Woods, who shot 71 in his opening round on his comeback from injuries suffered in a car crash, faltered early in the second round but managed to rebound on the back nine to finish two rounds at 1-over 145.

That was good enough to make the cut, though Woods was nine shots off the lead held by Scottie Scheffler at the time he finished. He was in a tie for 19th.

Woods bogeyed four of his first five holes to make the turn at 39. But he birdied the 10th hole from short range and made two more birdies coming in to offset two bogeys.

Scheffler, who shot 69 in his opening round, was 5 under for the day and 8 under for the tournament through 16 holes. He was five shots ahead of a quartet of players at 3 under.

Augusta National is showing its teeth at this year’s Masters.

Rain on the eve of the tournament softened the greens, but the golf course has been anything but receptive for the world’s best players. A few course tweaks and some gusty winds made things difficult as the scores and cutline edged higher in Friday’s second round.

A day after the field played the par-72 course in an average of 73.8, players were averaging 75.2 with about half the field still on the course. The leader in the clubhouse, Charl Schwartzel, was just 3 under, while the cut was projected at 4-over-par.

The toughest hole was the par-4 11th, which was lengthened after last year’s tournament and played at 520 yards in the second round. Players were averaging 4.64 on the hole. The 18th was also playing tough as the second most difficult hole at 4.47 shots.

The easiest hole in the second round was the par-5 second, where the field made three eagles and 37 birdies and played to an average of 4.57.

Tiger Woods struggled to a 3-over 39 on the front nine Friday but was still in good position to make the weekend in his comeback at the Masters.

Woods, who shot a 1-under 71 in the first round, bogeyed four of his first five holes before rebounding to play the last four 1 under. He was a 2-over-par on a blustery day at Augusta National where low scores were hard to find.

Woods wasn’t in imminent danger of missing the cut, which was projected at 4 over, but was six shots off the lead held on the course by Scottie Scheffler heading into the back nine. His frustrations were evident when he hit a bad wedge shot on the ninth hole and dropped his club in disgust before rebounding to get up-and-down for par.

Afternoon winds of 15-20 mph and gusting higher made conditions difficult, though the rains that came on the eve of the tournament meant the greens were still relatively soft.

First-round leader Sungjae Im wrestled his way to a 2-over 74 in the second round of the Masters and is 3 under through 36 holes, tied with Charl Schwartzel for the top spot at blustery Augusta National.

Im shot a sparkling 4-under 68 in breezy conditions on Thursday afternoon but found the going a bit rougher as the wind continued to pick up Friday morning. He managed three birdies against five bogeys to slip into a tie with Schwartzel, the 2011 Masters champion.

Im bogeyed the first hole but steadied himself with a birdie on the par-4 third. He made the turn at even par for the day but had trouble on the back nine, including a bogey on the par-5 15th when his fairway metal skipped over the green and into the water. He recovered with a birdie at the par-3 16th but a wayward drive on 18 led to one last bogey.

Former Masters champion Danny Willett also is at 3 under as he gets to the turn.

Tiger Woods has bogeyed four of his first five holes to fall to 3 over on the tournament and is in danger of missing the cut if he can’t turn things around.

Augusta National is catching up with Tiger Woods.

The five-time Masters champion is off to a rocky start in the second round. Woods has bogeyed three of the first four holes to move to 2 over for the tournament.

He is struggling with his drive and his irons early on. Woods missed each of the first two fairways and a questionable iron into the par-3 fourth landed short of the green, leading to a bogey.

The Masters is the only major championship where Woods has not missed the cut. That streak could be in danger if he can’t turn things around. The top 50 players and ties advance to the weekend.

The projected cut currently is 3 over, but it could rise with a large group of players still on the course and winds whipping around Augusta National.

Tiger Woods began his second round at the Masters with a bogey to drop back to even par for the tournament.

The five-time Masters champion hit his tee shot on the par-4 first into a bunker. His approach shot landed to the right of the green. His ensuing pitch rolled 7 feet past the pin and his put drifted left. He settled for a tap-in bogey.

Woods posted a solid 1-under 71 in the opening round in his first competitive round since a car accident in February 2021 severely injured his right leg.

The 46-year-old has never missed a cut at the Masters. The top 50 players and ties advance to the weekend at Augusta National.

Charl Schwartzel navigated the breeze to post a 3-under 69 in the second round of the Masters, the best of the early wave of golfers at Augusta National.

The 2011 Masters champion is a 3 under for the tournament and in good position for the weekend.

Schwartzel put together five birdies, including one on the par-3 16th that he set up with a beautiful tee shot to within 4 feet. He saved par from the trees on the par-4 18th, splashing out of the front left bunker to 9 feet and then draining the putt.

Schwartzel wrapped up just moments before five-time Masters champion Tiger Woods was scheduled to tee off for his second round. Woods posted a 1-under 71 in the opening round.

Tiger Woods will have one fewer playing partner for the second round of the Masters.

Louis Oosthuizen has withdrawn from the tournament. Organizers made the announcement about 90 minutes before Oosthuizen was to tee off alongside Woods and Joaquin Niemann.

Oosthuizen cited an injury as the reason. The specifics were not immediately announced. He opened the tournament with a 4-over 76 on Thursday.

His absence means Woods and Niemann will play as a twosome for the second round. They will be the second-to-last group, teeing off at 1:41 p.m.

Dustin Johnson is stalking the lead early in the sound round of the Masters.

The 2020 Masters champion birdied the par-3 fourth hole to move to minus-4, one shot behind Sungjae Im.

Johnson put together a tidy 3-under 69 in the opening round on Thursday. His began the second round with three straight pars before hitting an iron to within 5 feet at the fourth before making the putt.

Im wobbled early, flubbing a recovery shot at the par-4 first in which the ball failed to reach the green and rolled back down the hill toward his feet. He bounced back by rolling in a 24-foot birdie putt to get back to 5 under.

Five-time green jacket winner Tiger Woods is part of the afternoon session. Woods is coming off a 1-under 71 in his first professional event since a car accident in February 2021.

The wind is expected to rise during the second round at the Masters, and there’s a good chance the scores will rise right along with it.

The National Weather Service is forecasting sunny skies at Augusta National with sustained winds in excess of 15-20 mph throughout the afternoon.

Nineteen of the 90 players in the field posted scores of par or better during the opening round. That number could thin with the cut looming.

The top 50 and ties will make it to the weekend. Several high-profile names will be looking to bounce back after shaky opening rounds. Brooks Koepka and Kevin Kisner both opened with 3-over 75s while Justin Thomas and Bryson DeChambeau posted 4-over 76s in more benign conditions on Thursday.

Tiger Woods will tee off in the afternoon and is coming off a solid 1-under 71 on Thursday.

Tiger Woods is right where he wants to be heading into the second round of the Masters. He’s in red numbers at 1 under, one of only 17 players who broke par.

He’ll have a better idea where he is when Woods arrives Friday afternoon.

Sunjae Im starts the day with a one-shot lead after a 5-under 67. He is one shot ahead of Cameron Smith, with Dustin Johnson among those two behind. Im and Johnson are early starters in the second round with stronger wind in the forecast.

Friday also is about the top 50 and ties who make the cut. This is the only major in which Woods has never missed the cut as a professional.

The big test for Woods is how his legs hold up. This is his first time walking 18 holes in consecutive days since he returned from his car crash 14 months ago. 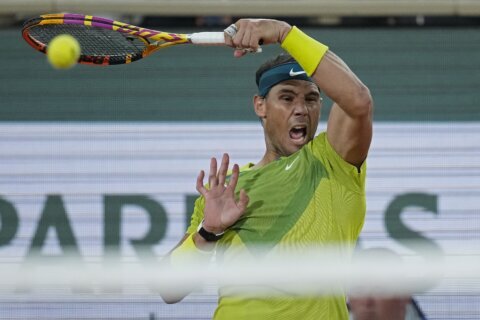