Six strokes ahead entering the round, Kupcho shot a 2-over 74 for a two-stroke victory over Jessica Korda in The Chevron Championship. The 24-year-old from Colorado finished at 14-under 274 for her first LPGA Tour title.

The event that started in 1972 as the Colgate-Dinah Shore Winner’s Circle and became a major in 1983 is moving to Houston next year after failing to attract a sponsor willing to keep it in the California desert.

Seven strokes ahead of Korda and defending champion Patty Tavatanakit at 18 under after holing birdie putts over 30 feet on the par-4 fourth and par-3 fifth, Kupcho played the final 13 holes in 4 over.

Pia Babnik of Slovenia closed with a 66 to finish third at 11 under.

SAN ANTONIO (AP) — J.J. Spaun won his first PGA Tour event — and his first trip to the Masters — by firing a final-round 69 at the Valero Texas Open on Sunday.

In his 147th PGA Tour start, Spaun survived a double-bogey start to his round by recording five birdies with no bogeys to finish at 13-under at TPC San Antonio. It gave him a two-shot margin over Matt Kuchar (69) and Matt Jones (66).

The 31-year-old Spaun closed with four straight pars, and no one could close in on him. His previous best finish on tour was runner-up in 2018 at the RSM Classic.

BILOXI, Miss. (AP) — Steven Alker cruised to his second victory on the PGA Tour Champions, shooting a final-round 7-under 65 to win the Rapiscan Systems Classic by six shots.

Alker’s 18-under total was a record at the event, which moved to Grand Bear Golf Club this year after 10 editions at Fallen Oak.

Padraig Harrington shot 65 to surge into a tie for second with Alex Cejka. Bob Estes, who started the day one shot back, slipped to third after shooting 71.

A day after Alker fired a course record 62 during the second round to take the lead, he followed it up by playing near-flawless golf to hold off an early charge from Estes.

Estes, still searching for his first victory on the 50-and-over tour at age 56, pulled even with Alker three times on the front nine but fell off the pace with a bogey at the par-4 eighth hole and couldn’t keep up when Alker ripped off three straight birdies to start the back nine.

SAVANNAH, Ga. (AP) — T.J. Vogel had a 5-under 67 in the final round to win the Club Car Championship at The Landings Club by a stroke.

Vogel beat 54-hole leader Mark Anderson and Ryan Blaum in winning his first PGA Tour-sanctioned event. He birdied the first hole and had an eagle at the par-5 third hole before trotting out three straight birdies on the fifth, sixth and seventh holes.

“I’ve worked so hard for this, I have so many people to thank, and I’m just happy,” said Vogel, who finished with a 17-under 271. “I finally proved to myself I could do it. I was out here as a young pro, but not quite ready at that point. I moved back, worked my way back up and just progressed. I felt like my progression was very slow, but I felt like I always kept moving a little bit up, a little bit up, and this is a big step here.”

Andrea Lee won a three-hole playoff for the Epson Tour victory over Lucy Li in Tucson, Arizona. The two were tied at 3-under 69 after the final round, prompting a playoff. Daniela Darquea finished behind them. … Mateusz Gradecki rallied from five shots behind with a 6-under 66 for a three-shot victory in the Limpopo Championship in South Africa, becoming only the second Polish player to win on the Challenge Tour. The tournament was co-sanctioned by the Sunshine Tour. Hennie Du Plessis had a 70 to finish second. … Lee Anne Pace won the Investec South African Women’s Open for a record fifth time, beating Magdalena Simmermacher of Argentina in a six-hole playoff. Both closed with a 2-under 70. … Alejandro Tosti of Argentina closed with a 2-under 69 and capped off an eight-shot victory over Clordomiro Carranza in the 90 Abierto del Centro on the PGA Tour Latinoamerica circuit. … Mao Saigo finished bogey-double bogey for a 4-over 76 and held on for a one-shot victory in the Yamaha Ladies Open on the Japan LPGA. 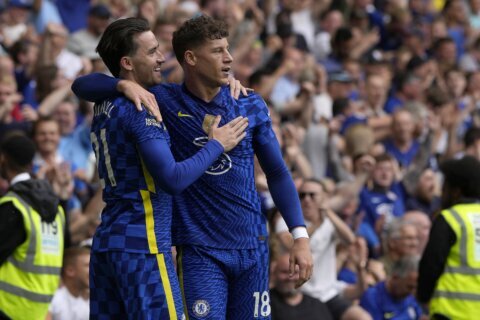