NEW YORK (AP) — Ryan Strome scored twice, Adam Fox added a goal and Igor Shesterkin made 31 saves as the New York Rangers recorded a third-straight shutout and their 50th win of the season, 3-0 over the Winnipeg Jets on Tuesday night.

Shesterkin was stellar from the start, making six saves in the first, 12 in the second and 13 in the third. The shutout was his second straight and sixth of the season. He also blanked Detroit 4-0 on Saturday after backup Alexandar Georgiev stopped Philadelphia 4-0 on April 13.

With the victory, the Rangers moved into a first-place tie with idle Carolina with 106 points atop the Metropolitan Division. Both teams have five games remaining, including another meeting at Madison Square Garden next Tuesday.

Eric Comrie made 31 saves for the Jets. Winnipeg trails the Dallas Stars by 10 points in the race for the second wild-card spot in the Western Conference. The Jets have five games remaining.

Jean-Gabriel Pageau and Sebastion Aho scored for New York, and Ilya Sorokin made 39 saves in his fifth straight start as the Islanders fell for the second straight game.

LOS ANGELES (AP) — Phillip Danault scored the tiebreaking goal early in the third period, and Los Angeles solidified its grasp on a playoff spot with a victory over Anaheim.

Jonathan Quick made 29 saves in a frequently spectacular performance, and Adrian Kempe scored the first goal in the Kings’ third victory in four games. Los Angeles is closing in on the end of its three-season playoff drought, moving five points clear of Vegas for third place in the Pacific Division.

Adam Henrique scored and John Gibson stopped 26 shots for the Ducks, who will miss the playoffs in four consecutive seasons for the first time in franchise history. Anaheim has lost 17 of 20.

TORONTO (AP) — William Nylander scored his career-high 32nd goal of the season and Jack Campbell made 36 saves in his 30th win of the year as Toronto defeated Philadelphia.

Auston Matthews, who leads the NHL with 58 goals and is looking to become the first player since 2011-12 to reach the 60-goal in a season, sat out a second straight game for Toronto with an undisclosed injury.

TAMPA, Fla. (AP) — Jakub Vrana had two goals, including the tiebreaking score in the third period, to lead the Detroit over Tampa Bay.

Ross Colton scored twice and Nikita Kucherov added his 19th of the season for Tampa Bay. Vasilevskiy finished with 27 saves.

MONTREAL (AP) — Cam Talbot had his third shutout of the season to help Minnesota past Montreal.

Talbot made 26 saves as Minnesota (48-21-7) swept the season series between the teams. Kevin Fiala scored and assisted on Matt Boldy’s goal in the third period.

In his second start of the season, Carey Price made 28 saves.

Jake DeBrusk and Taylor Hall also scored for Boston, which won its second straight after a season-worst three-game losing streak.

Robert Thomas and Pavel Buchnevich scored for St. Louis, which had a nine-game winning streak snapped.

Ville Husso made for 31 saves for St. Louis, He had won his previous six starts.

The Bruins were making their first appearance in St. Louis since a 5-1 win in Game 6 of the 2019 Stanley Cup Finals. The Blues went on to win the crown in seven games.

NASHVILLE, Tenn. (AP) — Matt Duchene scored his 40th goal of the season and Mikael Granlund had the only goal of the shootout to lead Nashville over Calgary.

Filip Forsberg also scored and Juuse Saros made 19 saves in regulation and overtime for Nashville, winners of two of three.

Andrew Mangiapane scored twice and Dan Vladar made 25 saves in regulation and overtime for Calgary, which had its two-game winning streak snapped. The Flames inched closer to clinching the top spot in the Pacific Division with the standings point for the shootout loss.

Alex Formenton had a pair of goals in regulation for the Senators. Parker Kelly also scored and Nikita Zaitsev had two assists.

J.T. Miller and Brock Boeser each had a goal and an assist for Vancouver, and Travis Dermott scored his first goal for the Canucks, who lost for the first time since April 3.

Ottawa’s Filip Gustavsson stopped 34 of 37 shots for his first win since Nov. 13.

Vancouver’s Jaroslav Halak stopped all 14 shots he faced in the first period, but appeared to suffer an injury late in the frame and was replaced by Thatcher Demko to start the second. Demko made 15 saves in relief.

Rudolfs Balcers also scored and Kaapo Kahkonen made 22 saves to help the Sharks snap their longest skid since losing 10 straight in November 2005.

Jack Roslovic scored twice for Columbus for his third multi-goal game in the past five contests. Elvis Merzlikins made 25 saves. The Blue Jackets have lost 11 of their last 14 games. 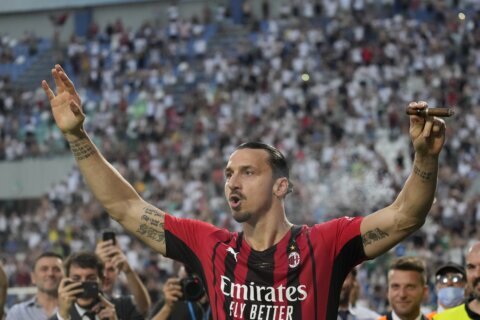 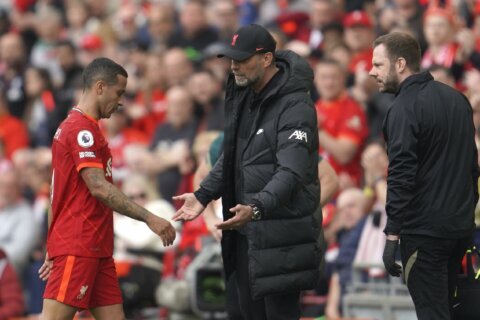 Liverpool’s Thiago might be fit for Champions League final