TORONTO (AP) — Auston Matthews scored his NHL-leading 59th and 60th goals of the season, and the Toronto Maple Leafs beat the Detroit Red Wings 3-0 on Tuesday night to clinch home-ice advantage in the first round of the Stanley Cup playoffs.

The 24-year-old Matthews, who snapped a five-game goal drought, is the first player to score 60 times in a campaign since Steven Stamkos in 2011-12.

John Tavares had the other goal and Jack Campbell made 20 saves to register his fifth shutout of the season for Toronto, which set a franchise record with its 30th home victory of the season.

The Leafs are now locked into the No. 2 seed in the Atlantic Division and will open the playoffs next week at Scotiabank Arena against either the Boston Bruins or Tampa Bay Lightning.

BOSTON (AP) — Jake DeBrusk snapped a 2-2 tie in the second period, Linus Ullmark made 19 saves and Boston beat Florida to clinch the first wild card in the Eastern Conference.

DeBrusk scored the eventual game-winner when he slammed home the rebound of a Brad Marchand shot at 4:59. Ullmark is 5-1 in his last eight appearances and has only allowed 10 goals in that span.

Erik Haula and Taylor Hall scored six seconds apart in the first period and Marchand notched his 32nd goal late in the third for Boston, which will travel to Carolina in the first round of the Stanley Cup playoffs.

Panthers goalie Sergei Bobrovsky had 34 saves as Florida lost for the second straight game after rattling off 13 wins.

Chris Kreider scored his 52nd goal for the Rangers, who have lost two straight and three of seven and are assured of finishing second in the Metropolitan Division. Jacob Trouba and Alexis Lafrenière also scored, and Igor Shesterkin finished with 31 saves.

Despite losing its third straight, Nashville clinched a wild-card spot thanks to Dallas’ shootout win over Vegas.

Filip Forsberg scored two power-play goals, Matt Duchene had a goal and two assists and Roman Josi had one goal and one assist for the Predators, losers of three straight. Juuse Saros made 30 saves but left the game with 6:32 remaining and was replaced by David Rittich, who made 3 saves.

DENVER (AP) — Valeri Nichushkin scored one of Colorado’s three goals in the second period and the Avalanche held on late to match the franchise record for points in a season with a win over St. Louis.

Erik Johnson and Josh Manson also scored in the second. Artturi Lehkonen added a goal just 9 seconds into the third period to make it 4-1. St. Louis rallied in the closing minutes, but Nazem Kadri ended the threat by scoring an empty-net goal with 46.2 seconds left.

The Avalanche have amassed 118 points to tie the club mark set by the 2000-01 squad that went on to win the Stanley Cup.

Darcy Kuemper made 28 saves to help the Avalanche end a four-game slide.

Ryan O’Reilly scored twice, Brandon Saad added a goal and Jordan Binnington had 29 saves for a Blues team that will face Minnesota in the first round of the playoffs, with home ice between the two still to be determined. It was the first loss in regulation this month for the Blues, who are 12-1-2 in April.

VANCOUVER, British Columbia (AP) — Quinn Hughes had a goal and two assists to set a franchise record for points by a Vancouver defenseman, and the Canucks beat Seattle but were eliminated from playoff contention.

Dallas ensured Vancouver would miss the playoffs for a second year in a row with a 3-2 shootout win over the Vegas Golden Knights.

Oliver Ekman-Larsson had a goal and an assist for Vancover, while Sheldon Dries, J.T. Miller and Luke Schenn all scored and Conor Garland contributed three assists.

Jordan Eberle and Connor Geekie scored for the Kraken and Joey Daccord made 22 saves.

PITTSBURGH (AP) — Connor McDavid had a goal and three assists to outduel Sidney Crosby, and surging Edmonton rolled past Pittsburgh.

McDavid pushed his point total to an NHL-best 122 by finishing off his 22nd career four-point game with a pretty shot from a tight angle 9:13 into the third period. His 44th goal gave the Oilers a three-goal lead.

Jeff Carter picked up his 19th goal for the Penguins, who fell to Edmonton at home in regulation for the first time since 2006.

DALLAS (AP) — Miro Heiskanen made the only shot in a seven-round shootout and Dallas moved closer to clinching a playoff spot with a victory over Vegas, which is still hanging on to slim playoff hopes.

Jason Robertson reached the 40-goal mark by scoring twice for the Stars. Dallas and Nashville are tied atop the Western Conference wild-card standings with 95 points, and both have two games left. The top two teams advance.

Vegas has 91 points, but must win its last two games and get some help to make the playoffs again. The Golden Knights made the Stanley Cup Final in their inaugural season in 2017-18 and have been in the playoffs the past three seasons.

WASHINGTON (AP) — Playing without injured captain Alex Ovechkin, Washington missed an opportunity to move up in the standings with a loss to New York.

The Capitals blew a lead and gave up four unanswered goals to an opponent that has long been out of playoff contention. They allowed power-play goals to Ryan Pulock and Noah Dobson, goaltender Ilya Samsonov botched a puck-handling attempt behind the net to help Casey Cizikas score short-handed and Tom Wilson turned the puck over to Anders Lee for New York’s fourth goal of the game.

Washington failed to pass rival Pittsburgh for third place in the Metropolitan Division after the Penguins lost at home to Edmonton, but the Caps still have two more chances before the end of the regular season.

Ilya Sorokin made 32 saves to help the Islanders snap a five-game losing streak near the end of what has turned into a lost season a year after reaching the East final.

ST. PAUL, Minn. (AP) — Travis Boyd scored the go-ahead goal, which stood after a long review, and last-place Arizona beat Minnesota to slow the Wild’s pursuit of home-ice advantage in the first round of the playoffs.

The loss snapped a 10-game winning streak for the Wild, who are in a battle for home ice with the St. Louis Blues, their first-round opponent. The two entered Tuesday tied with 109 points, though the Wild have a game in hand.

Karel Vejmelka stopped 34 shots for the Coyotes. Marc-Andre Fleury made 21 saves in the loss.

Stamkos has at least three points in each of his past five games and is the eighth NHL player to reach 100 points this season.

Nikita Kucherov had a goal and three assists and Andrei Vasilevskiy made 20 saves for Tampa Bay, which has won four straight.

OTTAWA, Ontario (AP) — Drake Batherson scored in overtime to give Ottawa a win over New Jersey.

Batherson also scored in regulation, Tim Stutzle had a pair of goals and Thomas Chabot also scored for Ottawa in this matchup of teams near the bottom of the Eastern Conference. Brady Tkachuk chipped in three assists, while Anton Forsberg made 37 saves.

Nolan Foote had a pair of goals for the Devils, whose skid extended to four games. Pavel Zacha and Yegor Sharangovich also scored. Mackenzie Blackwood, making his first start since Jan. 19, stopped 29 shots for the Devils.

SAN JOSE, Calif. (AP) — Max Comtois and Sonny Milano scored in a span of less than a minute in the second period and Anaheim beat San Jose. Neither team is playoff-bound.

Trevor Zegras and Josh Mahura also scored and Zach Aston-Reese had an empty-netter for the Ducks, who had lost six of their past seven games. Anthony Stolarz made 31 saves to beat San Jose for the third time this season.

Brent Burns and Scott Reedy scored for the Sharks in their final home game of the season. Kaapo Kahkonen made 25 saves. 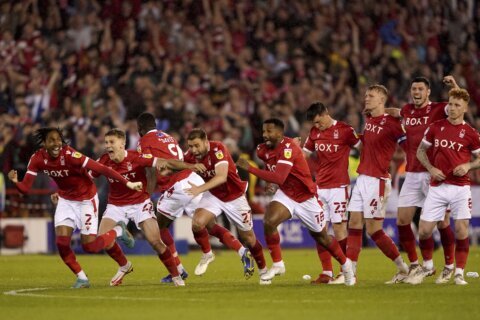 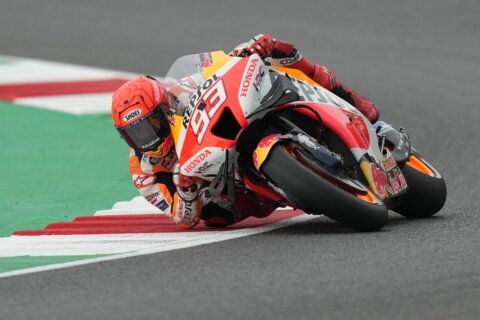