MILAN (AP) — Lazio boosted its bid for a European spot and put its derby nightmare behind it after a…
Listen now to WTOP News WTOP.com | Alexa | Google Home | WTOP App | 103.5 FM

MILAN (AP) — Lazio boosted its bid for a European spot and put its derby nightmare behind it after a comfortable 2-1 win over Sassuolo in Serie A on Saturday.

Manuel Lazzari and Sergej Milinković-Savić scored to send Lazio to fifth, a point above Atalanta and Roma, who play on Sunday.

An unmarked Hamed Traorè pulled one back for Sassuolo deep into stoppage time.

Lazio was still reeling from a hefty 3-0 defeat to city rival Roma before the international break. That had a negative effect on attendance, too, with less than 20,000 fans at the Stadio Olimpico.

It was also a poor moment for team captain Ciro Immobile, who has received a lot of criticism following Italy’s failure to qualify for the World Cup because of his poor scoring record for the Azzurri.

Spezia celebrated wildly after a last-gasp goal earned what could prove to be a crucial 1-0 win over fellow struggler Venezia.

Venezia — as it has done on several occasions this season — gifted the goal to Spezia when visiting defender Mattia Caldara’s header went straight to Rey Manaj. His attempt was saved by Venezia goalkeeper Niki Mäenpää but Emanuel Gyasi bundled in the winner in the fourth minute of stoppage time.

Bottom club Salernitana lost at mid-table Torino 1-0 after Andrea Belotti converted a penalty at the second time of asking.

Torino was awarded its first penalty of the season when Belotti was pulled down by Salernitana defender Federico Fazio. Belotti’s spot kick was saved by Luigi Sepe but he was told to retake it after encroachment. He fired towards the same corner and this time Sepe went the other way.

Fazio was sent off five minutes from fulltime following a second yellow card for another foul on Belotti, who also hit the post in stoppage time. 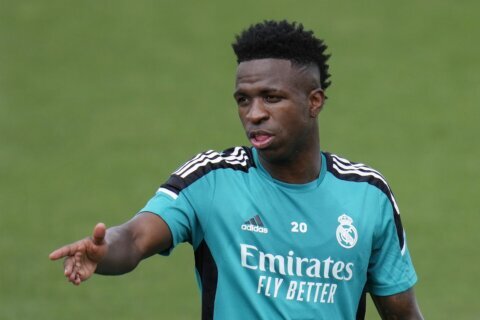