CARSON, Calif. (AP) — Javier “Chicharito” Hernandez and Sega Coulibaly scored in the first half and the LA Galaxy ended LAFC’s unbeaten start to the season with a 2-1 victory Saturday.

The Galaxy (4-2-0) continued their success in the city rivalry known as El Trafico, improving to 6-2-5 in the series. They have never lost at home in seven meetings (5-0-2), taking maximum points every time they have scored at least two goals.

“Really, the only thing that matters today is the three points,” Galaxy coach Greg Vanney said. “A lot of cards, a lot of emotions, whatever it was going on out there, we got away with the three points.”

Cristian Arango scored for LAFC (4-1-1), which had won three straight games by two-goal margins. It was an especially frustrating outing for forward Carlos Vela, who could not match Chicharito in the first meeting of the former Mexican internationals in Major League Soccer.

Latif Blessing looked to have tied it at 2 in the seventh minute of second-half stoppage time when he put the ball in after a frantic scramble in front of goal, but referee Chris Penso waived it off after video review showed Mamadou Fall was offsides in the buildup.

“I thought we were very unlucky not to get a point tonight. If two calls go our way, we definitely get a point and maybe get three. Those calls were very close,” LAFC coach Steve Cherundolo said.

The LAFC bench swarmed Penso immediately after the final whistle, the last act in an emotional match that had 10 yellow cards handed out.

Chicharito put the Galaxy ahead in the 13th minute, cutting across the 6-yard box unmarked to head in a cross from Samuel Grandsir. It was the fifth goal of the season for Chicharito and second in three derby appearances.

Coulibaly got his first goal in 24 games for the Galaxy in the 31st minute to make it 2-0. Grandsir was able to chest down Raheem Edwards’ pass following a short corner before spinning around to send the ball through the box where Coubali coolly finished.

Arango finished off Vela’s rebound in the 79th minute following a long throw, but LAFC could not find an equalizer despite piling on the pressure in the closing minutes.

“We knew that it was going to be like that. They’re a very aggressive and offensive kind of team, and they’re playing the Traffico,” Chicharito said. “I think we should have gone and scored the third goal and be a little bit more ruthless, but we’ll take the three points. … Los Angeles, it’s gold, blue and white.”

Vela had two clear chances in the first half, but he put his shot off the left post in the 23rd minute after Mahala Opoku forced a turnover and was offsides when he headed in a free kick five minutes later.

Vela was also dispossessed from behind at the edge of the box by Grandsir’s slide tackle, thwarting his breakaway before getting a shot away three minutes into the second half. 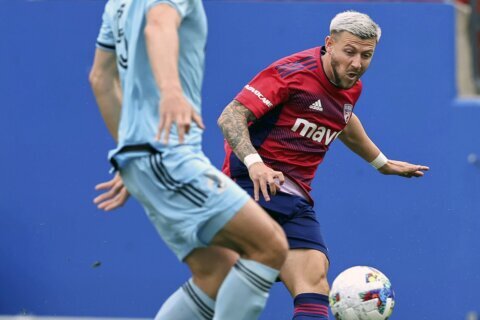