The Champions League semifinal lineup will be settled this week, with Liverpool and Real Madrid needing to defend two-goal leads to make it through.

The other two games are more finally poised with Villarreal and Manchester City only holding one-goal advantages.

Bayern must raise its game to avoid being upset by Spanish club Villarreal and keep alive its hopes for a quadruple of trophies this season. The six-time European champions struggled from the start of the first leg against Villarreal and were far from impressive with a 1-0 home win against relegation-threatened Augsburg in the Bundesliga on Saturday, when it had just four shots on goal and none on target in the first half. Champion in 2020 by beating Paris Saint-Germain, Bayern’s title defense was ended by the French side in the quarterfinals last season. Villarreal is trying to reach the last four of the Champions League for only a second time after 2006. The team based in a city of 50,000 people in southeastern Spain hadn’t even made it to the quarterfinals since 2009.

Chelsea coach Thomas Tuchel was candidly defeatist after the first leg, declaring the European champion’s title defense to be over. A 6-0 Premier League rout of Southampton at the weekend might have restored some confidence after conceding seven goals in its previous two matches. While Chelsea’s Premier League target is just holding onto third place, Madrid is cruising at the top in Spain. So much so, Toni Kroos and Luka Modric were rested in a 2-0 win against Getafe that leaves Madrid 12 points clear. There is still doubt about whether left back Ferland Mendy will play as he continues to nurse a muscle problem. Madrid has won eight of its last nine games in all competitions, with its lone setback a 4-0 home loss to rival Barcelona in the Spanish league in March.

City travels to Spain after a grueling draw with Liverpool that kept it top of the Premier League and saw Riyad Mahrez deployed only from the bench in the second half. It’s a sign of the strength of City’s resources that British record-signing Jack Grealish also didn’t start after only being a substitute in the first leg win over Atletico on Tuesday that was secured by Kevin De Bruyne’s goal. Atlético needs its attack to click after now going two games without scoring. Diego Simeone’s side had no shots on target against City, and only one against relegation-threatened Mallorca in a 1-0 Spanish league loss on Saturday. The defense was largely effective in Manchester and could be boosted by the return of José María Giménez, who missed the first leg because of a muscle injury. Simeone rested several regular starters against Mallorca, including forward João Félix who is primed for a return to action against City, which has yet to win the Champions League despite more than $1 billion spent on players since its Abu Dhabi takeover in 2008.

With a two-goal lead, Liverpool could be starting to think about its next cup assignment — an FA Cup semifinal game against Manchester City on Saturday. The prospect of a Champions League final meeting with City remains alive if 2019 winner Liverpool can complete the job against Benfica and then overcome Bayern Munich or Villarreal in the semifinals. While Liverpool is a six-time European champion, Benfica hasn’t even made it to the European Cup semifinals since 1990. Its glory days were in the 1960s with a pair of European titles. To advance this time could require goals from Darwin Núñez, who has six from four matches — including in the first leg against Liverpool. He netted a hat trick in Benfica’s 3-1 home win against Belenenses in the Portuguese league on Saturday. 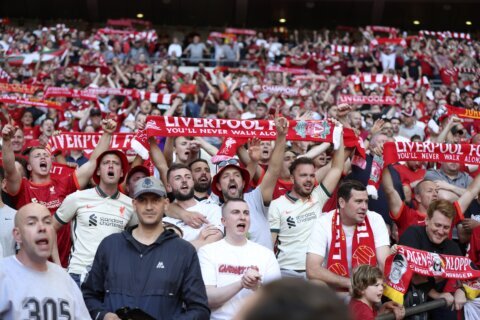