Entering the game one point behind the Lightning, Boston finished the night with 85 points — tied with Toronto for second in the Atlantic Division. Tampa Bay has 84 points, good for fourth.

Brandon Hagel and Steven Stamkos scored for Tampa Bay, and Andrei Vasilevskiy made 36 saves for the Lightning.

Erik Haula assisted on all three Bruins goals — his first career three-assist game — as Pastrnak twice tied it after the Lightning took the lead. Trade-deadline pickup Hampus Lindholm also had an assist in his Boston debut.

MONTREAL (AP) — Claude Giroux had two assists in his first game for Florida, fellow newcomer Ben Chiarot set up a goal against his former teammates and the Panthers beat Montreal.

The Panthers recently acquired Giroux from Philadelphia and Chiarot from the Canadiens.

ST. LOUIS (AP) — Travis Konecny scored twice and Hayden Hodgson had a goal and an assist in his NHL debut as Philadelphia beat St. Louis.

The Flyers snapped a 13-game losing streak on the road, winning away from home for the first time since Dec. 29 at expansion Seattle.

Vladimir Tarasenko and Alexei Torpchenko scored for the Blues, who have lost three of four.

Kirill Kaprizov had a goal and an assist and Kevin Fiala also scored for Minnesota, which has won four in a row and is 6-1-1 in its last eight games. Talbot has won his past seven starts.

The Wild (80 points) moved one point ahead of St. Louis for second place in the Central Division.

Bo Horvat scored his 25th goal and J.T. Miller added his 27th for Vancouver. Miller had a shot ring off the post in overtime right before Eriksson Ek’s game-winner.

Thatcher Demko, who has played in 20 of the past 21 games, stopped 33 shots for the Canucks. Vancouver has lost six of eight and was coming off a 3-1 win in Colorado the previous night.

Pius Suter and Sam Gagner scored for the Red Wings, who won the previous two meetings this season in Detroit.

RALEIGH, N.C. (AP) — Tyler Seguin scored in the shootout after goalie Scott Wedgewood dazzled in his Dallas debut against Carolina.

It was the most saves in franchise history for a goalie playing his first game with the team, breaking the record of 43 set nearly 38 years ago by Jon Casey for the Minnesota North Stars.

Nino Niederreiter had two goals and Vincent Trocheck scored the other one for the Hurricanes. Brady Skjei set up both of Niederreiter’s goals.

Frederik Andersen was credited with 12 saves for Carolina. He stopped Michael Raffi’s penalty shot with 5:51 to play in regulation when the score was tied.

Wedgewood is with his third team this season. He began with New Jersey and then was acquired by Dallas this week from Arizona.

LOS ANGELES (AP) — Alex DeBrincat had a goal and an assist in regulation and then scored the only goal in a shootout to lift Chicago over Los Angeles.

Patrick Kane also had a goal and an assist for the Blackhawks, who have won two straight for the first time since earning four consecutive victories in the middle of January. Sam Lafferty also scored.

Collin Delia, playing for only the third time this season, made 43 saves.

Phillip Danault scored twice for the Kings, his fourth multigoal game of the season. Danault also has a career-high 21 goals.

Trevor Moore added a short-handed score for Los Angeles. He’s the first Kings player since Mike Richards in 2011 to have a short-handed goal in two straight games.

LAS VEGAS (AP) — Evgenii Dadonov had a goal and two assists, and Vegas defeated Nashville in a game that included a frightening injury.

Golden Knights forward Brett Howden was wheeled off the ice on a stretcher after going headfirst into the boards near the Vegas bench. He was taken to a hospital and was in stable condition, the team said.

Shaking off a strange week that saw him traded to Anaheim at the deadline, only to have the NHL negate the transaction 48 hours later due to a no-trade clause, Dadonov scored his sixth goal in eight games and has 32 points this season.

Filip Forsberg scored for the Predators and Juuse Saros made 44 saves.

WINNIPEG, Manitoba (AP) — Brady Tkachuk had two goals and Ottawa scored three times in a 3:15 span of the third period to beat Winnipeg.

Tim Stutzle and Michael Del Zotto each had two assists for Ottawa.

Josh Morrissey and Kyle Connor, with his 40th goal of the season, scored for the Jets. Connor Hellebuyck stopped 28 shots.

Kailer Yamamoto, Derick Brassard and Evander Kane also scored for the Oilers, who had lost their previous two games but improved to 6-1-1 in their last eight. Mike Smith made 28 saves. 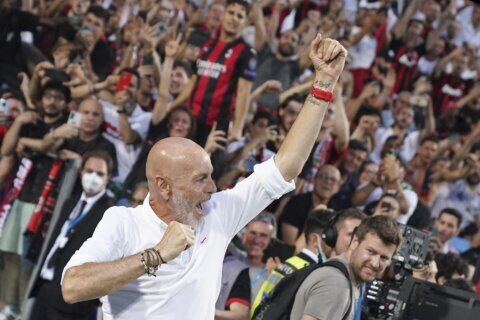 Philadelphia scores early and goes on to down Portland 2-0