Mitch Marner, Ilya Mikheyev and Ondrej Kase scored for Toronto. The Maple Leafs were again without NHL goals leader Auston Matthews as he served the second of a two-game suspension.

Called up from the minors last week with No. 1 netminder Jack Campbell out because of a rib injury, Kallgren got his second NHL start in place of the scuffling Petr Mrazek after shutting out the Dallas Stars 4-0 on Tuesday night.

The Maple Leafs sported their green and white Toronto St. Pats jerseys — a nod to the franchise’s moniker from 1919-27 — on St. Patrick’s Day.

Brett Howden and William Karlsson each added a goal for the Golden Knights. Logan Thompson made 33 saves as Vegas snapped a five-game losing streak and moved into eighth place in the Western Conference with 70 points, one point in front of Dallas, with 19 games to play.

COLUMBUS, Ohio (AP) — Anthony Mantha scored twice, Alex Ovechkin and Connor Sheary each had a goal and an assist and Washington beat Columbus for its third straight victory.

The fourth shooter for the Penguins, Rust snapped a wrist shot from the slot past goalie Ville Husso.

Jarry improved to 30-12-6, thwarting all four St. Louis shooters in the tiebreaker. He made 23 saves in regulation and overtime.

NEW YORK (AP) — Kyle Palmieri scored the tiebreaking goal with less than three minutes left in the third period and Ilya Sorokin made 29 saves in the Islanders victory over the rival Rangers.

Anders Lee also scored for the Islanders. They are 4-0-1 in their last five games.

Chris Kreider scored his 40th goal — and NHL-best 21st on the power play — and Igor Shesterkin had 26 saves for the Rangers.

Travis Sanheim had a goal and an assist, and James van Riemsdyk and Cam York also scored for Philadelphia. The Flyers snapped a three-game losing streak.

EDMONTON, Alberta (AP) — Connor McDavid, Kailer Yamamoto and Tyson Barrie each had a goal and an assist and Edmonton beat Buffalo for its fourth victory in a row.

Leon Draisaitl, Darnell Nurse and Devin Shore also scored for the Oilers, and Mike Smith made 27 saves for his first victory since Feb. 17.

Draisaitl scored his 40th of the season, and McDavid his 34th. Draisaitl became the fastest Oilers player to score 40 goals since Jimmy Carson in 1988-89.

Victor Olofsson scored for Buffalo, and Craig Anderson made 30 saves. The Sabres had won two straight.

Klingberg tied it with 4:46 left in regulation and ended it with 10 seconds to go in the five-minute overtime.

Nedeljkovic had his second of the season and the fifth of his career. Suter scored midway through the second period.

Phillip Danault and Adrian Kempe also scored for the Kings. 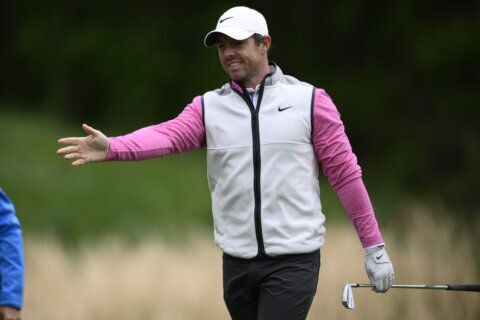