DUBLIN (AP) — Ireland accounted for Scotland 26-5 in Six Nations rugby and earned the Triple Crown on Saturday, then waited for a favor from England for a possible trophy upgrade.

The four-try bonus-point victory put Ireland on top of the championship by three points before the closing match in Paris. But France was up to the added pressure, beating England 25-13 three hours later and winning the championship and the Grand Slam.

The runner-up Irish had silverware regardless, their sixth Triple Crown in the Six Nations era, since 2000. But it was their first trophy won in front of their home crowd in 18 years.

That made their seventh straight home win over Scotland a little tastier.

“We were searching for that x-factor performance. We did just enough,” captain Jonathan Sexton said.

“I wanted us to have something to show for all our hard work over the last few weeks. Three bonus-point wins in a row after bouncing back from the loss in Paris, to do that I am very proud of this team and everyone on it.”

Ireland produced when it had to in a messy match at Lansdowne Road, while Scotland was disruptive and competitive, giving a better effort than it did in beating Italy in Rome last weekend.

But Ireland’s superior power in the pack was decisive, with their first three tries all to forwards coming off rucks or mauls. The bonus fourth in the last minute wasn’t pretty either, as replacement scrumhalf Conor Murray took an offload from wing James Lowe and crashed through three Scots to score.

The first try was to busy hooker Dan Sheehan, who broke off a rolling maul to cross in the 17th minute. Prop Cian Healy went over in the 28th with a helpful push from Sheehan and locks Tadhg Beirne and Iain Henderson.

Scotland looked contained, but reminded the Irish not to drop their guard just before halftime when prop Pierre Schoeman, with three Irish on his back, reached out to plug the ball on the try-line.

Scotland, behind 14-5 at halftime, should have had the next try in the new half but captain Stuart Hogg wasted a four-on-one chance by going for the line himself, and being tackled out in the corner by Hugo Keenan.

After more than half an hour of near-misses and Scotland resistance, Ireland finally posted a third try when flanker Josh van der Flier, the only Irishman to play every minute of the campaign, blew through a channel of Scots to score.

Sexton made three straight conversions but missed the last chance. Soon after, he was doing a lap of honor with his kids.

Scotland’s third defeat in five matches condemned it to fourth place for a third straight year.

Coach Gregor Townsend said, “It’s a big win for Ireland, which is tough to take. We know we have to be a lot better.” 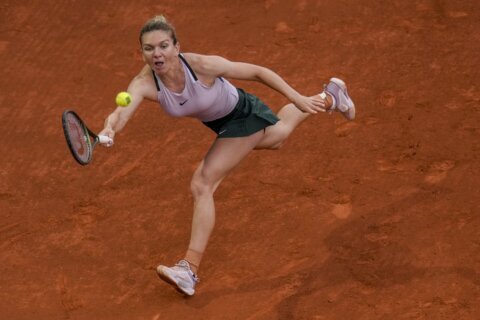