INDIAN WELLS, Calif. (AP) — Taylor Fritz defeated Spanish qualifier Jaume Munar 6-4, 2-6, 7-6 (2) on Tuesday in the third round of the BNP Paribas Open, making him one of four American men still alive in the desert tournament.

Fritz reached the semifinals at Indian Wells last year, his career-best result in an ATP Masters 1000 event. The son of former WTA Tour pro Kathy May has been on an upward trajectory since, reaching the fourth round of the Australian Open in January — his best showing yet in a Grand Slam event.

John Isner beat 14th-seeded Diego Schwartzman 7-5, 6-3 to reach the fourth round. The 6-foot-11 American capitalized on his 16-inch height advantage, blasting 13 aces and frustrating Schwartzman with clever drop shots. Isner didn’t even need any tiebreakers; 18 of his 30 sets played this year have ended in tiebreakers.

“I felt like she wanted to use her experience and kind of trick me,” Swiatek said. “I like that because it’s like a new experience for me. I’m pretty proud of myself that I could win against such a smart player.”

Simona Halep, the 2015 champion, beat Sorana Cirstea 6-1, 6-4. The Romanians played for the first time in 12 years and have split their four meetings.

“I feel like I played perfect in the first set,” Halep said. “The second set was a little bit tougher because I started to miss. She started to play a little bit better. But I think it’s a strong victory for me.” 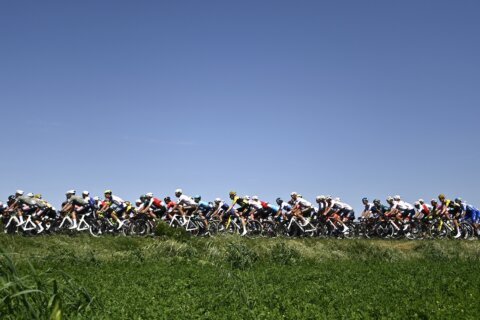