Castagne scores on return, helps Leicester to win in EPL

LEICESTER, England (AP) — Timothy Castagne marked his first appearance of 2022 with a stunning long-range strike to set Leicester on its way to a 2-1 win over Brentford in the Premier League on Sunday.

The Belgium full back, who has been sidelined since late-December with thigh and shoulder problems, curled into the top corner in the 20th minute at King Power Stadium.

The strike by James Maddison for Leicester’s second goal in the 33rd was just as sweet, the playmaker curling a free kick over the wall and into the net from 25 meters (yards) having won the set piece himself.

Yoane Wissa reduced the deficit in the 85th as Brentford applied pressure late in the game but Leicester held on for a victory that lifted the team to 10th place in the standings.

However, with a finish in the European positions unlikely, Leicester’s priority in the final two months of the season is likely to be winning the Europa Conference League.

Brentford stayed eight points above the bottom three but has played more games than most of the teams in the relegation fight. 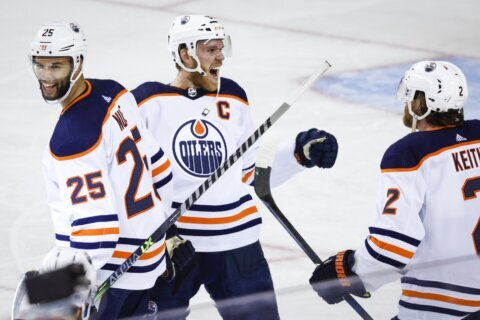