NEW YORK (AP) — Sandy Brondello wasn’t sure about her future after parting ways with the Phoenix Mercury last month.

She wasn’t unemployed for long.

Brondello was hired as New York Liberty coach on Friday, calling it an honor to join the historic WNBA franchise.

“I owe immense gratitude to the team’s ownership and front office for entrusting me with this important role during such an integral time in the history of the organization,” she said.

Brondello led the Mercury to the WNBA Finals last season. She had a 150-108 record in eight years with Phoenix, making the playoffs every year.

“Sandy brings a wealth of coaching experience and is a proven winner with a championship pedigree, both as a player and coach in the WNBA and internationally,” Liberty general manager Jonathan Kolb said. “Throughout her longstanding professional coaching career, she has demonstrated her ability to build consistent and sustained success as a skilled leader and mentor on and off the court.”

She replaces Walt Hopkins, who left the Liberty last month after helping the team reach the playoffs. New York lost to Brondello’s Mercury in the first round on a last-second shot. Phoenix went on to the Finals before losing to Chicago in four games.

Brondello inherits a roster with a lot of young talent, including Sabrina Ionescu, last season’s Rookie of the Year Michaela Onyenwere and Betnijah Laney.

“We are excited to have Sandy join us,” Liberty owners Clara Wu Tsai and Joe Tsai said in a statement. “We ran a thorough search process for the next head coach, and when we met with Sandy in New York, we knew she would bring not only her wealth of experience but also her passion for elevating our star players and developing our young core.”

Brondello knows how good this New York team can be, after the Mercury escaped with a last-second victory in the opening round of the playoffs against the Liberty.

“I think we can score more points, get some easy baskets in transition,” Brondello said. “I saw the ability they had. Get the players in the right position. The future is really bright.”

Brondello said she’ll try to fill out her staff in the next couple of weeks. One potential candidate is her husband, Olaf, who is an assistant with the Chicago Sky.

“If that works out it would be great for our family, we’ll see,” she said. “He’s a great coach. The players would be really lucky.” 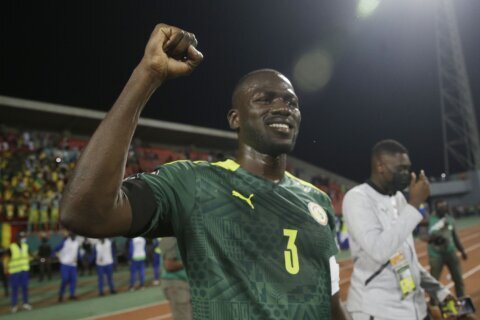