LONDON (AP) — Norwich will head into 2022 in last place in the Premier League after losing 3-0 at Crystal Palace on Tuesday for its fifth straight defeat.

First-half goals from Odsonne Edouard, Jean-Philippe Mateta and Jeffrey Schlupp gave Palace the win in the continued absence of its manager, Patrick Vieira, who tested positive for the coronavirus last week.

Key attacking midfielder Conor Gallagher and forward Wilfried Zaha were also missing for the hosts, too, but they were still too strong for the Canaries, who slumped to their 13th loss in 19 league games.

Both teams named two goalkeepers among the substitutes and were still unable to fill their respective benches due to coronavirus cases and injuries.

Norwich manager Dean Smith made six changes after a 5-0 thrashing at home by Arsenal but did not get the start he hoped for, with Palace winning a penalty from its first attack.

Will Hughes turned nicely in the area and went down following a challenge by Kenny McLean, which saw referee Paul Tierney point to the spot.

Edouard took responsibility — with Zaha, the usual penalty taker, absent due to suspension — and slotted home in the eighth minute to end his goal drought dating back to October.

A brief respite occurred for Norwich when the referee needed nearly seven minutes to fix a technical issue which stopped him from being able to communicate with the fourth official, but more pain was coming.

Tyrick Mitchell picked out the run of Edouard, who cut the ball back for Mateta, and the loanee from Mainz drilled into the bottom corner after 38 minutes.

Mateta repaid the faith of Vieira after the French forward struggled for not just goals but also appearances since a temporary move at the start of 2021.

Edouard was involved again for the Eagles’ third goal, with a dangerous run into the area resulting in the ball ricocheting to Schlupp and the Ghana international rifled home from a tight angle in the 42nd.

Norwich was booed off by its fans at halftime. 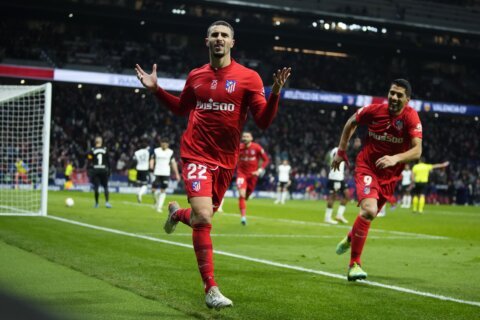