MILAN (AP) — Juventus ended the year on a positive note by beating relegation-threatened Cagliari 2-0 on Tuesday to close the gap to the top four in Serie A.

Moise Kean and Federico Bernardeschi scored as Juventus moved to within four points of Atalanta, which was surprisingly held to a 0-0 draw at struggling Genoa.

Atalanta was in fourth place and the final Champions League qualifying berth.

Juventus had struggled at the start of the season but things were starting to click under returning coach Massimiliano Allegri and the Bianconeri came into the match having won five of its past six matches, drawing the other.

It almost took an early lead but Kean headed Juan Cuadrado’s cross off the far post.

He did better five minutes from halftime when he headed in Bernardeschi’s cross following a superb run from the winger.

And Bernardeschi got on the scoresheet himself seven minutes from time when he turned in a pass from Dejan Kulusevski for his first goal since July 2020. He received a standing ovation from the crowd in Turin for ending his 43-match drought.

Atalanta tried everything but could not find a way past a resilient Genoa team and missed the chance to move into second place in Serie A.

It was one-way traffic but when Atalanta did find a way through the defense it was denied by good saves from Genoa goalkeeper Salvatore Sirigu.

Atalanta could have moved a point above Napoli and AC Milan before their games on Wednesday.

Genoa remained in the drop zone but inched to within two points of safety. It is one point above Cagliari.

Salernitana’s match at Udinese was not officially postponed but it could not take place because of a coronavirus outbreak at the visiting club.

Salernitana was blocked by local health authorities from traveling to Udine after at least two members of the team tested positive for COVID-19.

The league’s governing body said on Twitter : “The match #UdineseSalernitana was not held due to Salernitana failing to show up.”

A similar incident happened last year when Napoli couldn’t travel to Juventus. Napoli was initially handed a 3-0 loss and docked a point but it won on appeal and the sentence was revoked and the match rescheduled. 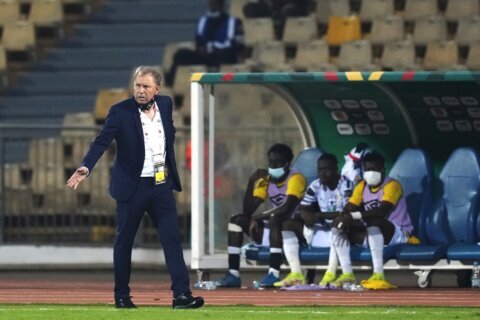