LIVERPOOL, England (AP) — Rafa Benitez was given the “full support” of Everton’s board on Monday amid a drastic downturn in the team’s results in the Premier League.

The backing came on the day Everton hosts Arsenal as the team looks to bounce back after failing to win any of its last eight games in the league, a run that has dropped the team to 16th place — five points above the relegation zone.

The club’s director of football hasn’t survived, though.

Marcel Brands “has left his post,” Everton said, after 3 1/2 years at Goodison Park during which he oversaw an outlay of close to 300 million pounds ($400 million) on signings.

That failed to translate into on-field success and with financial fair play restrictions hitting the club hard, Everton spent only 1.7 million pounds ($2.25 million) in the summer transfer window — the only one under Benitez so far.

“A strategic review of the football structure will now take place which will inform the best model for the club to proceed with in the long term,” Everton said in a statement.

“In the meantime, the owner and board of directors will continue to provide our manager, Rafa Benitez, with their full support.”

Brands, who signed a new three-year deal in April, was the target of abuse from fans as Everton lost 4-1 to local rival Liverpool last week.

He spoke with the board on Friday and agreed to step down.

“This decision has taken some time and some consideration and was one of the most difficult I have faced in my career,” Brands said.

“The board and I agreed that there is a clear difference in the vision and direction for this beautiful club and, with that in mind, the decision was taken,” he said.

Brands said he is “convinced that there is enough quality to improve the current situation quickly.” 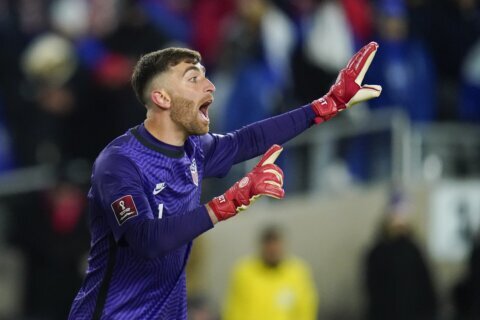 Matt Turner headed for transfer to Arsenal from New England