Cristiano Ronaldo’s chance to play at possibly his last World Cup could hinge on the result of Portugal’s winner-take-all clash against Serbia. The two teams are tied on points atop Group A before they meet in Lisbon and can’t be caught by others. Portugal has the better goal difference. Serbia rallied from two goals down to earn a 2-2 draw with Portugal in March. Ireland visits Luxembourg with both already eliminated. Only the group winners automatically qualify for the 2022 tournament in Qatar. The second-place finisher faces a playoff with the nine other runners-up and two group winners from the UEFA Nations League to decide the final three European spots.

Spain hosts Sweden with only one point separating the two teams in their final qualifying game and a direct World Cup berth up for grabs. Spain can settle for a draw in Seville, while Sweden needs a victory to avoid the playoffs. Sweden coach Jan Andersson has not said if Zlatan Ibrahimovic will feature after the 40-year-old star played 90-plus minutes in Thursday’s shock 2-0 loss at Georgia that cost Sweden the group lead. Spain should have midfielder Sergio Busquets back in its starting lineup. A crowd of 50,000 is expected at La Cartuja Stadium. Greece hosts Kosovo with both already eliminated.

Host Croatia faces Group H leader Russia in the key game. Russia has 22 points, two more than Croatia with one game left. The other four teams in the group can’t advance. Malta (5 points) hosts Slovakia (11), and Cyprus (5) travels to Slovenia (11).

Germany has already easily won the group and plays at Armenia. North Macedonia is second and chasing a place in the playoffs to move closer to its first World Cup appearance. It hosts Iceland. Liechtenstein hosts third-place Romania, which is one point behind North Macedonia. Armenia can also make the playoffs. 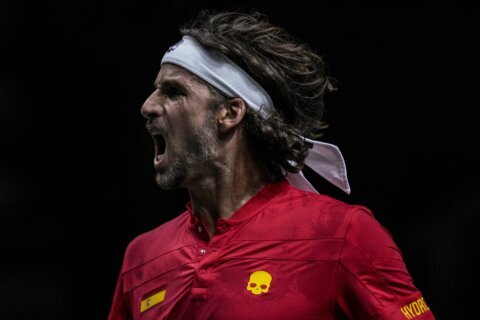 At 40, Lopez fills in fine for Nadal, Alcaraz in Davis Cup