Two of the Premier League’s in-form teams go head-to-head at the London Stadium when West Ham hosts Liverpool. The Hammers have lost only twice all season. The Reds are unbeaten in 16 matches since the start of the season and have scored 47 goals in all competitions. Liverpool can extend its unbeaten run to 26 matches, which would beat the club’s all-time league landmark set by Bob Paisley’s 1982 team. It’s not been going as well for former manager Rafa Benitez across Merseyside, where Everton hosts Tottenham. Benitez’s tenure at Goodison Park got off to an encouraging start but a draw with Manchester United has been followed by defeats to West Ham, Watford and Wolverhampton. The season has been derailed by significant injuries to Dominic Calvert-Lewin and Abdoulaye Doucoure. Antonio Conte won his first match in charge of Tottenham in the Europa Conference League and the challenge now begins to close the five-point gap on the top four. Mikel Arteta reaches 100 games in charge of Arsenal against Watford. The Spaniard took over in December 2019 and has won the FA Cup and Community Shield since replacing Unai Emery but hasn’t been able to return Arsenal to the Champions League. The Gunners are three points from fourth place after 10 games. Leeds is three points above the relegation zone as it hosts mid-table Leicester.

AC Milan hosts Inter Milan in the city derby with the Rossoneri boasting a seven-point lead over the Serie A champion at the top of the table. Unbeaten Milan has won all but one of its 11 league matches despite an injury crisis. That is beginning to ease but defender Theo Hernández will be suspended. Midfielder Hakan Çalhanoğlu is sure to get a fierce reception after joining Inter from Milan on a free transfer in the offseason. Milan is joint top with Napoli, which hosts Hellas Verona. Roma plays at Venezia earlier in the day and can move to within two points of Inter with a win. Lazio also plays a relegation-threatened team in Salernitana. Sampdoria and Udinese desperately need results to move away from the drop zone and they host Bologna and Sassuolo, respectively.

Real Sociedad visits Osasuna on a 15-game unbeaten streak in all competitions after its only loss in the season opener against Barcelona. Spain striker Mikel Oyarzabal is still unavailable due to injury, while striker Aleksander Isak was used as a late substitute in Thursday’s 1-1 draw with Sturm Graz in the Europa League. A win would lift Sociedad back ahead of Real Madrid into first place in Spain. Defending champion Atlético Madrid hopes to rebound from its 2-0 defeat at Liverpool in the Champions League when it visits Valencia. Valencia hasn’t beaten Atlético in 13 consecutive matches, with its last win over Diego Simeone’s team coming in 2014. Third-place Sevilla is at fifth-place Real Betis in the always heated Seville derby. Unai Emery’s Villarreal has the ideal opportunity to end its run of four league games without a victory when it hosts the struggling Getafe, while Elche travels to Mallorca.

Both Hertha Berlin and Bayer Leverkusen are feeling the pressure in the Bundesliga. Hertha coach Pal Dárdai is under scrutiny after sporting director Fredi Bobic acknowledged he considered firing him earlier in the season after the team’s poor start. But Hertha lost 2-0 at Hoffenheim last weekend and another defeat at home to Leverkusen would sharpen focus on Dárdai again. Leverkusen has slumped in the league since a 5-1 loss to Bayern Munich. Union Berlin visits Cologne later. Union won all four of the teams’ previous games in the Bundesliga. Last-place Greuther Fürth hosts Eintracht Frankfurt to close out the round.

Southern rivals Nice and Marseille continue their respective bids for second place as they look to leapfrog Lens. Nice is at home to mid-table Montpellier and only needs a draw to go above Lens into second on goal difference, but that’s only if Marseille does not beat 19th-place Metz at home. Marseille sits one point behind Nice and is boosted by the return of imposing Poland striker Arkadiusz Milik. He scored against Lazio in the Europa League this week and will benefit from playing alongside goal-scoring playmaker Dimitri Payet, who also netted against the Italian side. But Nice forwards Amine Gouiri and Andy Delort have been in fine form, with the slick Gouiri also turning provider with welcome assists this season. Delort faces the club that sold him this summer in a move that angered Montpellier fans. 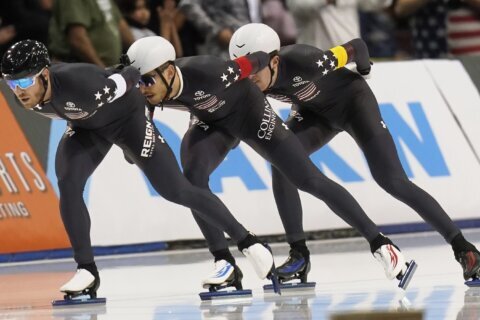