Korda broke the imposing Russian’s serve in the ninth game of the first set and then clinched it on his third set point. But the U.S. Open champion eased through the second set, forcing Korda into 14 unforced errors.

Medvedev broke for a 3-2 lead in the decider with a whipped forehand pass down the line despite being at full stretch retrieving a shot.

Korda looked stunned as his opponent milked the applause from the crowd in Paris.

“There were times where I could feel the crowd supporting me because there were crunch moments, and I really loved it,” Medvedev said. “If you talk about the third set, same. I managed to make some amazing shots.”

Medvedev, who is vying with top-ranked Novak Djokovic to finish the year as No. 1, served for the match but Korda broke him to trail 5-3.

He broke Korda straight back, sealing the victory on his first match point after Korda’s 40th unforced error of the match.

Medvedev next faces French qualifier Hugo Gaston, who rallied from 5-0 down in the second set to win 6-4, 7-5 against 18-year-old Spaniard Carlos Alcaraz.

As Gaston fought back, the home crowd cheered Alcaraz when he missed first serves or on double faults, and continued to do so despite the umpire repeatedly asking for calm.

A shocked-looking Alcaraz buried his head into his towel at 6-5 down while the crowd aggressively sang the French national anthem. Gaston clinched victory on his first match point.

Medvedev, however, felt that Gaston would be impacted by finishing at nearly 1 a.m.

“I remember when I finished after midnight, it was hard for me to recover the next day and to be back in shape,” Medvedev said.

Djokovic is unlikely to feel so tired.

He earlier advanced without playing a point because Gael Monfils pulled out injured.

Monfils, who is 0-17 against the top-ranked Djokovic, has an adductor injury.

Fourth-seeded Alexander Zverev advanced to the last eight after beating No. 16 Grigor Dimitrov 7-6 (4), 6-7 (3), 6-3 in an intense contest lasting 2 hours, 45 minutes and where Dimitrov saved two match points in the second set.

Zverev broke for a 4-3 lead in a tight first set but was broken back to 5-5 when serving for the set. He controlled the tiebreaker and clinched it with a volley at the net.

Zverev saved a break point with an ace in the ninth game of the second set and then had two match points with Dimitrov serving at 6-5. Dimitrov saved both of them with volleys at the net.

In the tiebreaker, Dimitrov raced into a 6-1 lead and then clinched it with a service winner, after Zverev had saved two set points.

Momentum finally drifted away from Dimitrov when he failed to punish Zverev in the sixth game of the decider, when Zverev was 0-40 down on his serve. Zverev broke for a 4-3 lead and saved another break point in the next game.

The imposing German then converted his third match point when Dimitrov sliced a return into the net.

Fritz saved two set points while trailing 40-15 in the 10th game of the second set. He later held serve to force a tiebreaker and had four match points at 6-2. Norrie saved one match point on his his own serve, but Fritz followed up a strong first serve with a forehand winner on the next point to advance.

Fritz has lost all four of his career matches against Djokovic, including losses this year at the Australian Open and the Rome Masters.

“Obviously (I am) playing my best tennis,” Fritz said. “I think if there was a time, it would be now that I can really push him.”

Seventh-seeded Hubert Hurkacz rallied to beat lucky loser Dominik Koepfer 4-6, 7-5, 6-2 to strengthen his chances of clinching a spot at the Finals, which starts on Nov. 14.

Hurkacz will reach the Finals if he wins his quarter against James Duckworth, an unseeded Australian who advanced to his first Masters quarterfinal with a 7-6 (6), 6-4 victory over Alexei Popyrin. 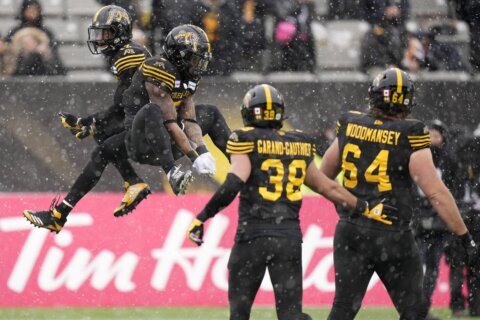 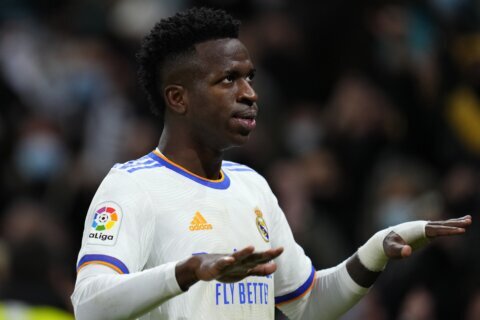