NEWARK, N.J. (AP) — Mackenzie Blackwood made 34 saves and the New Jersey Devils beat Florida 7-3 Tuesday night, handing the Panthers a second-straight loss in regulation after they went 11 games without one.

Andreas Johnsson scored twice and defenseman P.K. Subban had the go-ahead goal as the Devils had their biggest offensive output of the season. Nico Hischier, Pavel Zacha, Ty Smith and Jimmy Vesey also scored for the Devils, who are off to a 6-3-2 start.

Sam Bennett, Aleksander Barkov and Owen Tippett scored for Florida. Barkov’s goal was the 189th of his career, passing Olli Jokinen for the most goals in Panthers franchise history.

Florida lost for the first time in regulation against the Rangers on Monday at Madison Square Garden after a 10-0-1 start.

The Oilers had won nine of their first 10 games for the first time in franchise history. They went 0 for 2 on the power play after becoming the first team since Pittsburgh in 2007 to open a season with a power-play goal in 10 straight games.

Dylan Larkin had a goal and Moritz Seider scored into an empty net as the Red Wings won their third straight.

Jesse Puljujarvi scored on a breakaway with 34.2 seconds left in the second and Connor McDavid added his ninth goal of the season for Edmonton.

Edmonton goalie Stuart Skinner stopped 35 shots in his season debut, filling in for Mikko Koskinen on the first night of a five-game road trip.

Brad Marchand and Derek Forbort also scored for the Bruins.

The Senators, who canceled practice Monday for precautionary reasons, were without five players and an assistant coach who have been placed on the COVID protocol list.

David Pastrnak and Charlie McAvoy each had two assists, and Jeremy Swayman finished with 24 saves for the Bruins, who won for the 200th time under coach Bruce Cassidy and improved to 5-0 at home this season.

Zach Sanford and Nikita Zaitsev scored for Ottawa. Matt Murray stopped 33 shots for the Senators, who lost their fifth straight and for the eighth time in nine games.

TAMPA, Fla. (AP) — Martin Necas scored from the left circle 3:26 into overtime and Carolina won its 10th game of the season.

Carolina also got a goal from Teuvo Teravainen.

The Hurricanes (10-1-1) set a team record for the fewest games to reach 10 wins. Carolina had its season-opening, nine-game winning streak end Saturday in a 5-2 loss at Florida.

Steven Stamkos scored for the Lightning, who are 4-0-2 in the past six games.

MONTREAL (AP) — Adrian Kempe scored on a sweeping move at 3:39 of overtime and Los Angeles extended its winning streak to six games with a victory over Montreal.

Brendan Lemieux and Alex Iafallo also scored for Los Angeles. Cal Petersen made 33 saves for the Kings, who boast the longest current winning streak in the NHL.

Ben Chiarot and Jake Evans scored for Montreal, which fell to 3-11-1. Jake Allen made 31 saves.

WINNIPEG, Manitoba (AP) — Ryan O’Reilly was the only scorer in the shootout and St. Louis beat Winnipeg.

King took over after Jeremy Colliton was fired Saturday following a 1-9-2 start for a team that began the season with playoff aspirations.

Jeff Carter scored twice and Tristan Jarry had 30 saves for Pittsburgh, which lost for the fifth time in six games.

It was the second meeting of the NHL’s two newest franchises. Vegas beat Seattle on opening night, 4-3.

Theodore one-timed a pass from Jonathan Marchessault past Kraken goalie Chris Driedger just 30 seconds into the third to break a 2-all tie. Smith scored less than a minute later when he deflected a one-touch pass from Marchessault on a power play.

Alex Pietrangelo and Evgeni Dadanov also scored for the Golden Knights (7-6-0). Robin Lehner, who has won three straight and five of his last six starts, made 25 saves.

VANCOUVER, British Columbia (AP) — Troy Terry scored 3:52 into overtime to give Anaheim a win over Vancouver.

Cam Fowler and Isac Lundestrom scored in regulation for the Ducks, who extended their win streak to five games.

J.T. Miller and Elias Pettersson had third-period goals for the Canucks. Quinn Hughes and Brock Boeser assisted on both goals.

Anaheim’s John Gibson made 41 saves. Jaroslav Halak had 28 saves for the Canucks in his third start of the season.

Calgary’s streak of earning at least a point was stopped at 10 games. The Flames lost in regulation for the first time since their season-opener.

Milan Lucic scored for Calgary (7-2-3). Jacob Markstrom made 22 saves in the loss.

San Jose was without head coach Bob Boughner for a fifth straight game because he’s in COVID-19 protocol. 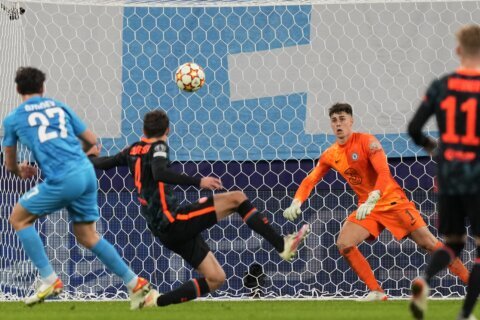 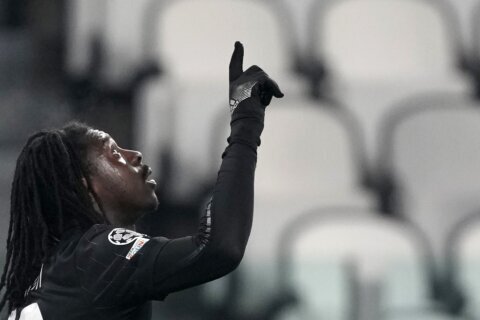 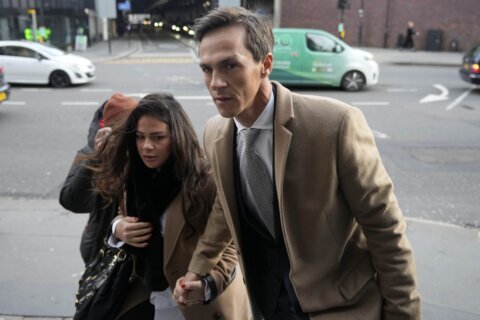