The third-seeded Collins, who is pursuing her third title of the season, beat Alison Van Uytvanck of Belgium 7-5, 6-3.

Simona Halep also advanced to the semifinals, rallying from a set and a break down to beat Jasmine Paolini of Italy 4-6, 7-5, 6-0.

The former top-ranked Halep will next meet fellow Romanian Jaqueline Cristian, who saved three set points in the second set on her way to a 6-3, 7-6 (5) win over fourth-seeded Veronika Kudermetova of Russia.

Riske and Collins have played each other once before — in Rome in 2018, when Collins won in three close sets.

The 73rd-ranked Riske is going into her second semifinal this year, after reaching the final in Portoroz, Slovenia in September.

She came back from 5-2 down in the second set to close out the win over Wang, who had upset U.S. Open champion Emma Raducanu in the previous round.

Collins, who is ranked 29th, recovered from a break down to take the opening set against Van Uytvanck and won three games in a row in the second to wrap up the win. 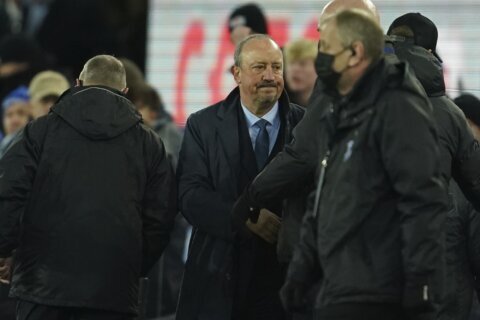