In a less chaotic manner, Bayern Munich and Juventus also recorded typical trademark wins to top their groups with three straight victories and no goals conceded.

Trailing 2-0 at halftime at home against Atalanta, with Paul Pogba left on the bench, United’s wild season under manager Ole Gunnar Solskjaer appeared ready to derail with last place in the group beckoning.

Ronaldo put the club back on top, 3-2, in the 81st minute after goals from Marcus Rashford and Harry Maguire to deliver a second straight come-from-behind win at Old Trafford in the competition.

Bayern routed Benfica 4-0 with late goals including one from Robert Lewandowski after standout saves by Manuel Neuer in the Lisbon stadium where they won the 2020 title 14 months ago.

It was an efficient 1-0 win for Juventus at Zenit St. Petersburg thanks to an 86th-minute goal by Dejan Kulusevski.

Defending champion Chelsea also cruised to a 4-0 win, against Malmö, but lost strikers Romelu Lukaku and Timo Werner to injuries.

Salzburg was the other group leader in action, beating Wolfsburg 3-1 with goals from the kind of young forwards the Austrian champion excels in nurturing then trading on.

Barcelona finally got a win, 1-0 against Dynamo Kyiv, to end some unwanted historic streaks for the club and stay in contact in the group led by Bayern.

Villarreal, which was beaten by Ronaldo’s stoppage-time winning goal three weeks ago, won 4-1 against Young Boys to lift the Europa League champion from last to second in the group.

A 0-0 draw between Lille and Sevilla dragged down the average goals to three per game with 24 in total one day after a 35-goal rush in the eight games Tuesday.

STILL AT THE WHEEL

Ole Gunnar Solskjær has many critics outside Manchester United who doubt the club is getting closer to major titles as he approaches three years in charge.

They included the fans who jeered the team off at halftime having seen Mario Pašalić score for Atalanta in the 15th minute and Merih Demiral in the 29th.

Marcus Rashford started the comeback in the 53rd and — with Pogba now on the field — Harry Maguire leveled in the 75th, six minutes before Ronaldo got his 138th career Champions League goal.

Solskjær praised the fans for helping lift and sing the players to victory, which “is what you do at Manchester United on a Champions League night.”

Bayern returned to the Stadium of Light in Lisbon without the new coach who replaced 2020 title-winner Hansi Flick.

Julian Nagelsmann was ill and stayed at the hotel while his team had two goals disallowed before striking four times, including two by Leroy Sané, from the 70th minute.

“The boys were sensational,” Bayern assistant coach Dino Toppmöller said. They now lead Benfica by five points, with Barcelona a further point back.

Next up at Camp Nou is a “clásico” against Real Madrid in La Liga on Sunday.

Neither Ukrainian team — Dynamo and Shakhtar Donetsk in Group D — has scored in a combined six games so far. 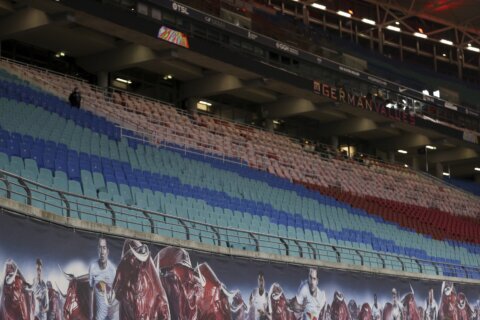