Sweden U21 player says he was racially abused by opponent

STOCKHOLM, Sweden (AP) — A player on Sweden’s under-21 national soccer team has claimed he was racially abused by an opponent in a European Championship qualifying match against Italy.

Anthony Elanga, a striker who plays at Manchester United, said he was subjected to a racist comment in Tuesday’s match in Monza, the Swedish soccer association said Wednesday.

“We have told our version of what happened and have submitted an oral report to both the referees and the match delegates,” said Claes Eriksson, the coach of Sweden’s under-21 team. “Now we are waiting for feedback through the match report and the referee report.

“Once they have arrived, we decide how to proceed.”

Sweden scored an equalizer in second-half stoppage time in a 1-1 draw.

“No one should have to be exposed to racism, it is completely unacceptable,” Eriksson said. “We all stand behind and support Anthony in this.”

The Italian soccer federation issued a statement denying that any racist incident occurred, adding that there was no racism reported by the match officials or the UEFA delegate.

The Italian federation said TV images show that the team’s players were urging Sweden to resume playing after the equalizer.

The 19-year-old Elanga has played one game for United this season, as a substitute in a 1-0 loss to West Ham in the English League Cup. 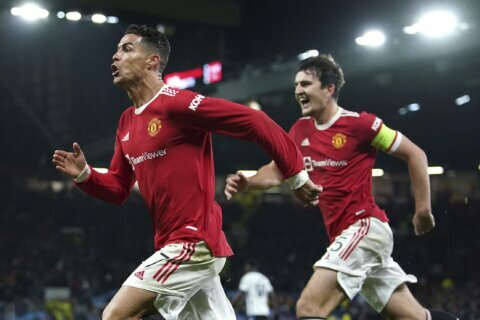