Not many people get to celebrate their 42nd birthday by making their final preparations for a UFC title fight. Glover…
Listen now to WTOP News WTOP.com | Alexa | Google Home | WTOP App | 103.5 FM

Not many people get to celebrate their 42nd birthday by making their final preparations for a UFC title fight.

Glover Teixeira had that honor Thursday, and the Brazilian mixed martial arts veteran is marking the milestone by thinking about the obstacles he surmounted to get to the brink of an unlikely championship.

“I’m a fan of this sport as well, and I love when people overcome situations and break the rules doing something that not many people have done,” Teixeira said. “If I win this title right now, who did that before? Only one guy in the UFC: Randy Couture. It’s a hard thing to do, and I’m glad that I’m here and I’m going to get it Saturday night.”

A remarkable career that began in 2002 and appeared to be on the wane only four years ago reaches another peak Saturday at the Etihad Arena in Abu Dhabi, where Teixeira (32-7) will take on Jan Błachowicz (28-8) for the light heavyweight belt at UFC 267.

Teixeira will be the UFC’s oldest first-time champion if he can upset Błachowicz, no fresh-faced kid himself at 38. Couture was 43 when he reclaimed the UFC heavyweight title in 2007, but the famed MMA pioneer didn’t face quite the same obstacles as Teixeira to reach this point.

While preparing to take on the hard-hitting, well-rounded Błachowicz in recent weeks, Teixeira has also spoken at length for the first time about his journey as a teenage illegal immigrant who found his way to the Connecticut gyms where he fell in love with the sport and made it his life’s work.

In opening up, Teixeira said he has felt the love of MMA fans who might not have paid attention to him earlier in his career.

“Lately a lot of people say, ‘Got to get that belt, make that movie!’” Teixeira said.

UFC 267 is the first numbered UFC event not on pay-per-view in the U.S. in a decade, although it’s still on ESPN+. The show takes place in the Middle East in the evening, making it an afternoon event in Europe and a morning spectacle for North American viewers.

But many worldwide viewers will be tuning in for the main event — the second-oldest combined championship fight in UFC history.

Teixeira got his first UFC title shot back in April 2014 when he took a 20-fight winning streak into the cage against Jon Jones, the most dominant and least focused light heavyweight in UFC history. Jones won a comfortable decision, and Teixeira entered a 5-5 stretch in which his best days appeared to be behind him.

But Teixeira refocused his life and training with help from the resources at the UFC Performance Institute in Las Vegas. He has since won five straight fights to earn another title shot.

Teixeira credits his surge to “passion for this sport. Lately, more discipline about it. More focus on what I have to do to become a champion. Of course, it didn’t work before, so I was doing something wrong. … I had to trust in my coaches and put in my discipline and say, ‘How much do I want this?’”

Błachowicz appears to be in control of the 205-pound division after his impressive victory last March over Israel Adesanya, whose attempt to step up from middleweight to become a two-division champion looked foolish when the hulking, sturdy Polish champion dominated him by decision.

Błachowicz is making his second defense of the title he won by knocking off Dominick Reyes last year. While many MMA observers favored Reyes in that fight, Teixeira said he picked Błachowicz because he respected his fellow veteran’s work ethic and toughness.

These light heavyweights have a clear mutual respect, but Błachowicz is confident he’ll stop Teixeira again at the precipice of his goal.

“He’s longer than me in this sport, so we are friends,” Błachowicz said. “No bad blood between us. But that doesn’t change anything. When we go inside the octagon, the fight will start, and I have to knock him out, and I will do it.” 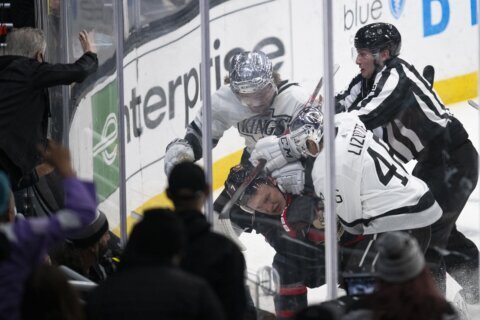