BERLIN (AP) — Substitute Thorgan Hazard got both goals, and got defending champion Borussia Dortmund a spot in the third round of the German Cup.

Dortmund beat second-division club Ingolstadt 2-0 Tuesday with Julian Brandt twice setting up Hazard after the Belgium forward came on in the 71st minute.

Dortmund had failed to impress before the goals, with Jude Bellingham hitting the crossbar in a rare first-half highlight. There were even some whistles from the home fans at the break.

But Hazard and team captain Marco Reus brought some urgency with their introduction and the Belgian scored a minute later after some good play on the right. Brandt crossed again for Hazard’s second easy finish in the 81st.

Dortmund again played without forward Erling Haaland, who is out with a hip muscle problem after previously missing three games with what the club said were muscular problems.

Goalkeeper Gregor Kobel was also out with a thigh injury, forward Donyell Malen had a gastrointestinal infection, and the trio of Reus, Hazard and Manuel Akanji all were on the bench at the start.

“We have to be careful with the guys,” Dortmund coach Marco Rose said of his players’ busy schedule.

Hertha Berlin progressed to the third round earlier Tuesday with a 3-1 win at fourth-division club Preußen Münster, which had a player sent off late in the first half when Nicolai Remberg was shown a second yellow card for diving.

It was Münster’s second loss in the competition. The club previously lost to Wolfsburg, which was subsequently thrown out of the tournament for using too many substitutes in the first round.

Dominik Szoboszlai’s strike before the break was enough for Leipzig to win 1-0 at fourth-division club Babelsberg, while former Bundesliga club Schalke was knocked out with a 1-0 loss at third-division club 1860 Munich and Hoffenheim routed second-division club Holstein Kiel 5-1 at home.

Freiburg needed penalties to win at third-division club Osnabrück, with Keven Schlotterbeck scoring in the last minute of extra time for 2-2 to force the shootout. Benjamin Uphoff made three saves for Freiburg to win the penalty shootout 3-2.

Hamburger SV also needed penalties to get past second-division rival Nuremberg. It finished 4-2 in the shootout after their game ended 1-1 with extra time.

Also, Marcus Ingvartsen scored with a brilliant strike from distance in extra time to earn Mainz a 3-2 win over Arminia Bielefeld.

Bayern Munich visits Borussia Mönchengladbach for what could be the game of the round on Wednesday, when Bayer Leverkusen, Union Berlin, St. Pauli and Cologne also play. 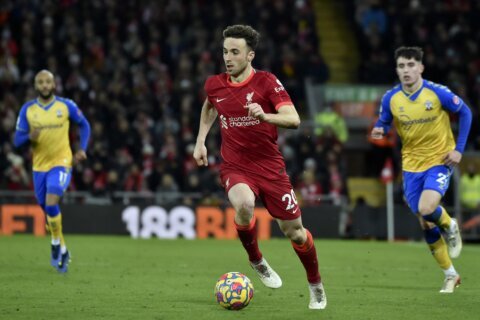 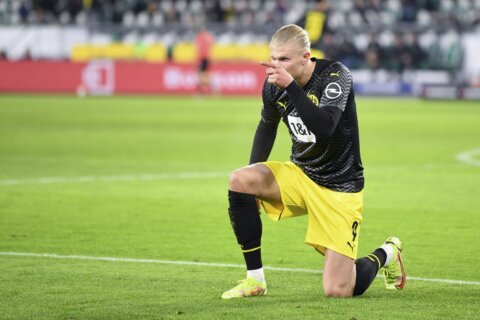