Coronavirus News: Montgomery Co. to lift mask mandate | Some may need fourth shot | Va. among best for vaccinations | Local cases of COVID-19 | How many in DC region are vaccinated?
Home » Sports » Germany beats Romania to…

HAMBURG, Germany (AP) — Thomas Müller scored the winning goal as Germany recovered from a goal down to beat Romania 2-1 and continue its winning start under new coach Hansi Flick in World Cup qualifying on Friday.

Romania took the lead with a ninth-minute goal from Ianis Hagi, the first Germany conceded in four games under Flick. Germany bounced back as Serge Gnabry leveled early in the second half before Müller’s winning goal in the 81st.

Germany extended its lead at the top of Group J to six points from North Macedonia and Armenia and has won all four games since Flick took charge following a last-16 exit at the European Championship under his predecessor Joachim Löw.

Germany started strongly in front of a crowd of 25,000 in Hamburg and was awarded a penalty early on when Timo Werner and Andrei Burca tangled in the box. After a long wait for video review, with Joshua Kimmich standing over the ball on the penalty spot, the decision was overturned.

Germany still seemed stunned by the turnaround when Hagi, son of Romania great Gheorghe Hagi, knocked the ball between Antonio Rüdiger’s legs and guided the ball just inside the far post.

Germany had plenty of chances to level the score, including a notable miss for Gnabry, before he blasted a low shot in the 52nd past goalkeeper Florin Nita.

A smartly worked corner yielded the winning goal as Leon Goretzka headed the ball on at the near post for Müller to put in at the far post.

“It’s not a satisfying feeling to go in 1-0 down at halftime but we felt we’d deserved more, so it’s all the better that we earned the two goals,” Müller told broadcaster RTL. “We know that when we go behind that not everything that we’ve done before has to collapse.”

North Macedonia moved up from fourth place to second with a 4-0 win over Liechtenstein. The Balkan nation aims to follow up its first European Championship campaign this year with a first trip to the World Cup.

Another team bidding to reach a first World Cup, Armenia is level on points with North Macedonia after drawing with Iceland 1-1 after Kamo Hovhannisyan’s goal was canceled out for Iceland by Isak Bergmann Johannesson. 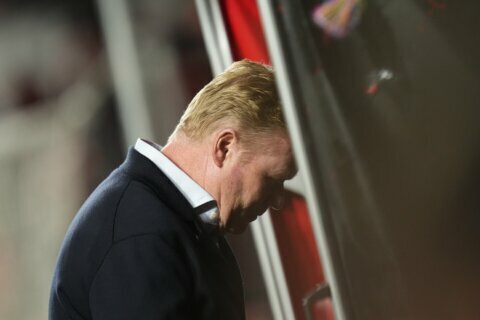