Hungary is facing a fresh FIFA punishment after its supporters fought with police in the stands at Wembley Stadium just after kickoff against England on Tuesday as officers sought to arrest a spectator on suspicion of racially abusing a steward.

A case was also opened into the English Football Association as organizer of the game, which ended 1-1 in London.

Polish fans in London may also have been involved in the disorder. Polish flags were on display in the Hungary sector and some in the crowd which pushed back against police wore clothes with the insignia of Polish clubs.

Poland’s own game in Tirana in Group I was suspended for around 20 minutes. Karol Świderski had just scored for Poland in the 77th minute when he was apparently struck by a bottle thrown from the Albania fans. Poland’s players walked off but returned to the field and held on to win 1-0.

Both the Albanian and Polish federations will face sanctions over the incidents.

Disorder by Hungary fans — including racism — during the home match against England in Budapest last month led to Hungary having to play Saturday’s game against Albania in an empty stadium.

FIFA put Hungary on probation with the threat of another game being played without fans if there was further disorder at games.

“FIFA strongly condemns the incidents at both matches and would like to state that its position remains firm and resolute in rejecting any form of violence as well as any form of discrimination or abuse,” FIFA said. “FIFA has a very clear zero-tolerance stance against such abhorrent behaviour in football.”

The English FA is already facing UEFA action over crowd unrest at the national team’s European Championship final loss to Italy at Wembley in July. 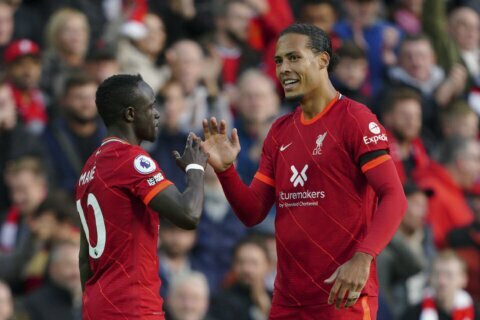