Coronavirus News: Fairfax Co. votes to increase substitute teacher pay | Is it time to get a COVID-19 booster? Which one? | Local cases of COVID-19 | How many in DC region are vaccinated?
Home » Sports » Daniel James scores for…

PRAGUE (AP) — Daniel James scored in the second half for Wales to hold host Czech Republic to 2-2 in World Cup qualifying on Friday.

James, who also scored in beating the Czechs 1-0 in Cardiff in March, netted past goalkeeper Tomas Vaclik from inside the area in the 69th minute.

Wales captain Aaron Ramsey scored to put the visitors ahead in the 36th minute, completing a fast counterattack from close range for his 18th international goal.

Just a couple of minutes later, Jakub Pesek equalized on a rebound after goalkeeper Danny Ward only deflected a shot by Filip Novak.

Early in the second half, Ramsey sent a low pass from about 20 meters to Ward who produced a major blunder, failing to control the ball that ended in his own net four minutes into the second half.

Wales was without star forward Gareth Bale because of a hamstring injury but looked sharper throughout the game.

Czech Republic coach Jaroslav Silhavy missed a number of starters, but key striker Patrik Schick who was suspended for two games after receiving a red card in Cardiff was available.

With Belgium the runaway Europe Group E leader with 16 points, the Czech Republic and Wales have eight each and are fighting for second spot and a place in the playoffs.

The Czechs have played one game more than Wales.

Only the group winners directly qualify for next year’s tournament in Qatar.

The Czechs play next against Belarus in Kazan and Russia on Monday, while Wales travels to Estonia.

Belgium has no World Cup qualifiers in this international window because the team is playing in the Nations League final four and will play European champion Italy for bronze on Sunday in Turin.

In Tallinn, Estonia beat Belarus 2-0 for the first victory of its campaign to move to fourth with four points, Belarus is bottom, a point back. 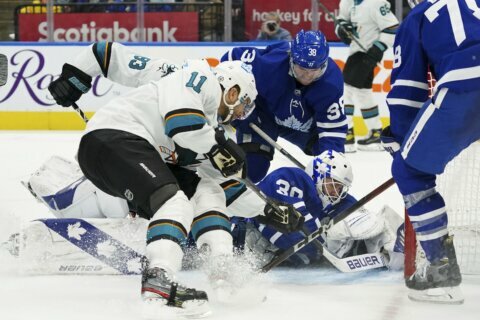